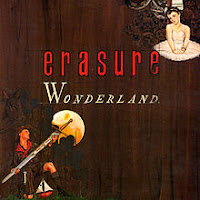 Along with songwriter and keyboardist Vince Clarke who had been part of Depeche Mode and Yazoo, Bell found success as the synth-pop band Erasure. The duo released their debut album Wonderland in the spring of 1986. Though the album only went to number 71 in their native UK, it charted well in Germany (at number 20) and Sweden (number 13). A number of the singles were popular on the US Billboard Hot Dance Music/Club Play chart.


The UK and the US listings of the album varied slightly, with a couple tracks swapped in order or replaced. I will review the US version of the album here.

Side one opens with “Who Needs Love Like That”, the first single from the album. It went to number 55 in the UK , number 48 in Germany and number 2 in France; in the US it reached number 8 on the Billboard Dance charts. I love the keyboard riff that opens this up-tempo track about a negative and destructive relationship.

“Reunion” goes right into the lyrics of the track without any form of intro; that is a nice change of musical pace. This one is about a couple coming together again after a long time, and this time the singer is not going to let the other get away again. I like the vocal harmonies on the chorus.

Things slow down a bit further with the next track. “Cry So Easy” has a signature synth sound from Clark that reminds me of his Yazoo songs. The lyrics tell of mistrust in a lover who turns on the waterworks to get their way. It makes the singer suspect everything about the person and whether their affections are even true.

“Senseless” adds a bit of a funky percussion beat to the synth.

As the second single, “Heavenly Action” only got to number 100 in the UK and 43 in Germany, but it also reached number 8 on the US Billboard Dance charts. This one is a straight-up love song with a catchy rhythm.

Side two starts with “Say What”, another very danceable track. I like the attitude on this one; very direct and in your face. The singer confronts someone who has led him on and toyed with his emotions.

“Love is a Loser” has a shuffling beat to it that is very different than any of the previous tracks. It reminds me a bit of the calliope of a merry-go-round. I like how Bell’s vocal delivery mirrors the bounce of Clarke’s keyboards.

“March on Down the Line” is a declarative statement about standing up for what you believe in and being counted.

Things slow down again for the melancholy “My Heart…So Blue”. I like the use of the backing vocals on this, giving it a chorus sound.

“Oh L’amour”, the third and final single, went to number 85 in the UK, number 16 in Germany, number 15 in Sweden, number 14 in France and number 3 on the US Billboard Dance charts. This song about unrequited love has a fantastic beat to it that makes you want to move.

Wonderland was the beginning of a successful partnership between Bell and Clark that continues to this day. I found the album to be quite enjoyable; some of the tracks I already had while there are others I have earmarked to add to my music library in the very near future. As a synth-pop fan, this release is right up my musical alley.
Posted by Martin Maenza at 4:39 AM