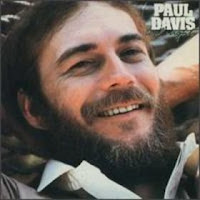 Today (April 21st) would have been the sixty-fourth birthday of American singer and songwriter Paul Davis. He passed away four years ago tomorrow, on April 22nd 2008.

His solo recording career spanned from 1970 to 1982. His final studio album was his seventh, 1981’s Cool Night which climbed up to number 52 on the US Billboard Hot 200. Besides being his highest ranking on the pop album chart, it also generated a trio of Top 40 singles.


Side one opens with the title track and the first single from the record. “Cool Night” went to number 34 in Canada, number 11 on the US Billboard Hot 100, and number 2 on the US Billboard Adult Contemporary charts. This mid-tempo, soft rock ballad was a favorite of mine back in the day with its slow, swaying arrangement. I can fondly remember this one coming on the top 40 radio stations or making the countdowns for a number of weeks on Solid Gold.

“You Came to Me” stays with the mid-tempo beats for this song about love walking into his life.

“One More Time for the Lonely” was the B-side to the first single. The melancholy music has a bit more of a synthesized sound to it with the cascading keyboards at the opening. This one tells of a singer who dedicates his performances to those who have loved and lost.

The Supremes had a hit with “Nathan Jones” in the spring of 1971. Davis covers the track here, giving it a new spin coming from a male singer’s perspective. The story is told from the angle of a guy who now dates the girl that Jones dated before he left town. I like the updated musical arrangement on this version as well.

“Oriental Eyes” was the B-side to the third and final single. The ballad has a soulful sound to it with a slow, syncopated groove. Davis’ vocals are sweet and soothing.

Side two starts with the second single, the best selling one of his career. “’65 Love Affair” went to number 11 in Canada, number 6 on the US Billboard Hot 100 charts (it spent 20 weeks total on the charts) and number 5 on the Adult Contemporary charts. Unlike earlier songs of his which had a more country feel to them, this one swung with a strong pop appeal thanks to an up-tempo beat and catchy musical hooks. I have always loved this song; I had it on a 45 back in 1982. The lyrics capture a classic nostalgia point from the mid-1960’s which were when I was born. But, for me, the song has a strong nostalgia tug from my high school days. As such, it still ranks as a four-star track on my iPod today.

“Somebody’s Getting’ to You” is another solid track about a romantic love triangle. This one could easily have been a hit with the high school teen girl audience at the time; the lyrics are tailor made for that.

The final single to chart was “Love Or Let Me Be Lonely”; it stalled for two weeks at number 40 on the US Billboard Hot 100 but did climb to number 11 on the Adult Contemporary charts. The song was originally recorded by the Friends of Distinction in 1970. I am very much a fan of the original but I appreciate Davis’ cover here too. Again, he was updating a classic track for a new audience.

“What You Got to Say About Love” has a sound that has a strong resemblance to Hall & Oates; it sounds like just the kind of tunes they were producing in their hit making run in the early 80’s.

The album closes with “We’re Still Together”, the B-side to the second single. The lyrics tell of couples that are breaking and the one couple who support their friends while finding strength in their own relationship.

Cool Night is a solid pop-rock record, executed perfectly by an artist who was clearly at the top of his game. After this album though, Davis retired from making records for a time. The only exceptions were some country duets which he recorded with Tanya Tucker and Marie Osmond. And that is a real shame as I think he could have continued to ride the wave of resurgence in his career.

Arista re-released the album on 2009 on CD after Davis’ death but it has since gone out of print again. Vinyl copies seem to be in good supply on eBay but digital versions of the songs are no where to be found. If you want to sample some of these tracks for yourself (as I did for this review), pop on over to YouTube and pull them up for a listen. I think you’ll be pleased that you did.
Posted by Martin Maenza at 4:30 AM