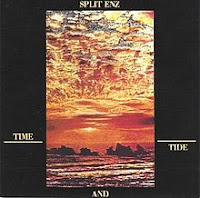 Hailing from down under in New Zealand, the band Split Enz combined a number of musical genres to create their sound. The group was together for about a decade (1975 to 1984) and released ten studio albums and a number of compilations.

This month marks the 30th anniversary of their seventh studio album. Time and Tide was released in April of 1982 and was their third album in a row to go to number 1 in both New Zealand and Australia. The album also reached number 71 in the UK, number 58 on the US Billboard Hot 200 chart and number 4 in Canada.


Side one begins with “Dirty Creature”. As the first single from the album, it went all the way to number 6 in Australia and number 3 in New Zealand. The track has a cool bass groove by Nigel Griggs and drums by Noel Crombie. Along with the piano by Tim Finn, they create a moody piece with a funky beat. The lyrics tell of a man haunted by a Taniwha, a mythical sea-dragon.

The mood-infused music continues with “Giant Heartbeat”. I like how Eddie Rayner’s keyboard notes bounce from channel to channel.

“Hello Sandy Allen”, the third single released in New Zealand only, was written about the world’s tallest woman. Neil Finn had met her on a talk show and, clearly, she made an impression on him. The song features a siren-like wail through out that gives it a bit of an off-putting quality.

“Never Ceases to Amaze Me” was released as the third single in Australia (where it went to number 50). This up-tempo and quirky track describes a walkabout a neighborhood and a person who has an odd sense of wonder. I really like the funky guitar riffs here.

“Lost for Words” has an anxious feel with the frantic music and the high pitched vocals. It really pulls you into its swirling spin.

“Small World” brings about a feeling of claustrophobia. The lyrics opine that the world is getting more crowded and technology makes it easier to be aware of what is going on across the globe.

Side two opens with the trippy synthesizer of “Take a Walk”. The song is about taking the time to pause in life, to appreciate everything so far.

“Pioneer” is an instrumental track written by Rayner. It acts as a nice overture for the following track.

The second single “Six Months in a Leaky Boat” went to number 83 in the UK, number 7 in both Canada and New Zealand and number 2 in Australia. The title refers to the time it took pioneers to sail from Australia to New Zealand. This is the song I was most familiar from the album; I heard it a lot on the local college radio station during my junior and senior years of high school (82 to 83).

“Haul Away” is an autobiographical song about Tim Finn’s life, set to a medieval folk song accompaniment.

Next up is “Log Cabin Fever” with a long, very atmospheric opening. The lyrics tell a tale of a descent into madness caused by isolation. I find it to be a very powerful musical piece; I like how the rhythms change up as the song progresses.

The album closes with “Make Sense of It”. Again, the band uses contrasting rhythms to build a complex composition.

Before doing my review of Time and Tide, I was only familiar with Split Enz through one of their greatest hits compilations. I have to say that there is a lot going on in the deeper album tracks, musical elements worth investing multiple listening sessions to truly appreciate. For all of my US readers, this might be an album that passed by your radar back in the 80’s as it did mine. If it did, it is definitely worth checking out.
Posted by Martin Maenza at 4:30 AM

Martin the Split Enz are one of my old favs. Conflicting Emotions is a good album too. Got to see Crowded House in Buffalo a couple of years ago they were great. They also a few Split Enz songs.

Jim, thanks for reading and the feedback. It is always appreciated.