Luther Vandross - Never Too Much 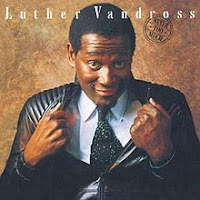 Today (April 20th) would have been the sixty-first birthday of American R&B singer, songwriter and producer Luther Vandross. The multi-Grammy award winning artist passed away on July 1st, 2005, from a heart attack. In 2008, he was ranked at number 54 on Rolling Stone magazine’s List of the 100 Greatest Singers of All Time.

After nearly a decade of singing back-up on records of such performers like Roberta Flack, Diana Ross, Carly Simon, Chaka Khan, Donna Summer, Bette Midler and more, Vandross finally was able to cut an album of his own. In August 12th, 1981, his debut album Never Too Much was released on the Epic Records label. It went all the way to number 19 on the US Billboard Album chart and number 1 on the US Billboard R&B charts. It also earned him his first two Grammy Award nominations in the categories of Best New Artist and Best R&B Vocal Performance Male.


Side one begins with the title track, a mid-tempo groove. “Never Too Much” was the first single from the album and it scored a number 1 on the R&B charts (a spot it held for two weeks); it also went to number 33 on the US Billboard Hot 100 and number 13 in the UK. I like how his voice bops adeptly through the verses of this one.

“Sugar and Spice (I Found Me a Girl)”, the third single on the album, on reached number 72 on the R&B charts in 1982. The horns are brought out on this mid-tempo tune, punctuating the percussive rhythms. That’s two danceable tracks back to back.

Time to slow things down with the next track, a mellow jam. Vandross scored another hit on the R&B charts (reaching number 10) with the second single “Don’t You Know That?”.

“I’ve Been Working” is another mid-tempo dance track that has a solid simmering going for it musically. The composition is tight and controlled.

Side two starts with “She’s a Super Lady”. I like the funky guitar riffs that open this celebration of a loving relationship.

Though Vandross penned it, Roberta Flack was the first one to record his “You’ve Stopped Loving Me” for the 1981 soundtrack Bustin’ Loose. This slow jam paints the picture of a man lost when the woman he loved steps out of his life.

The album closes with “A House Is Not a Home”, a cover of a 1964 Dionne Warwick song. This version became a signature tune for Vandross as it showcases is rich vocal textures quite well. Just listen to how, with a simple arrangement of soft piano and percussion to support him, he delivers an emotional performance without taking it over the top. He understands subtle nuances and masterfully serves them up.

When Never Too Much was released in the summer of 1981, I was transitioning between my sophomore and junior years of high school. While I had been very much into the disco and R&B music of the late 70’s, my tastes had shifted a bit to the new-wave and alternative invasions from Britain at this time. I was listening to a lot more college radio. As such, this debut album totally slipped by my radar. I did however get into more of the R&B sounds in the mid to late 80’s which included later offerings by Luther Vandross as well.

Listening to this album today, I can definitely see how this one would have fell in perfectly to my musical tastes of that time. The dance rhythms are solid and the ballads are very smooth. That is really one of the joys of me focusing now on music for this blog - it is allowing me to discover records I previously had missed (and giving me tracks to add to my ever-growing library of digital music downloads).
Posted by Martin Maenza at 4:33 AM

Email ThisBlogThis!Share to TwitterShare to FacebookShare to Pinterest
Labels: 80's, A House Is Not A Home, debut, Luther Vandross, music, Never Too Much