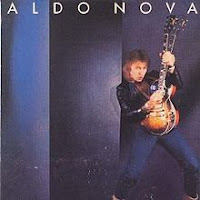 This month marks the 30th anniversary release of the self-titled debut album from the Canadian rock musician Aldo Nova. This Quebec native produced the release as well as sang, and played guitars, keyboards and synthesizers.

Aldo Nova went to number 8 on the US Billboard Hot 200; it was certified Gold within a month of its release. It took a number of years after that for it to achieve Platinum sales though.


Side one opens with his biggest hit “Fantasy”. The single went to number 14 in his native Canada, number 23 on the US Billboard Hot 100, and number 3 on the US Mainstream Rock charts. The song opens with what sounds like an excerpt from a video game before exploding into a huge rock anthem. I love the high energy to it. I can remember this song playing a lot on the album-oriented rock station we listened to from Buffalo. Being right there on the border of Canada, “Fantasy” was a huge deal. Whenever I hear it I am taken right back to my high school years; this was a must party song at the time.

“Hot Love” opens with the driving drums of Michael LaChapelle and Nova’s blazing bass. The track about throwing down and dirty reminds me a bit of another early 80’s Canadian rock act, Loverboy.

“It’s Too Late” has a nice rapid-fire guitar riff to it that instantly brings to mind another early 80’s Canadian rocker, Bryan Adams. In fact, Nova’s vocals here sound a bit like Adams’ as well.

“Ball and Chain” was released as a promo single for the album but only to rock radio stations. This one is a slower tempo track about a love relationship that is dragging the singer down.

Nova dances his fingers across the synthesizer and guitar on “Heart to Heart”, a mid-tempo track about those with broken hearts.

Side two begins with “Foolin’ Yourself”. As the second single from the album, it only got as high as number 45 in Canada and number 65 on the US Billboard Hot 100. The lyrics tell of a deluded girl who believes there might be a chance at reconciliation with a former boyfriend.

“Under the Gun” served as the B-side to the first single. It is the story of an outlaw who is hunted down after killing the man who ran off with his girlfriend.

“You’re My Love” has more of a soft-rock vibe to it.

“See the Light”, the more up-tempo closer for the album, was the B-side to the second single. This one features a very prominent keyboard riff, a strong guitar solo, and an echoing vocal effect.

Aldo Nova is a good debut album with a few standout rock tracks to it. Nova’s musical and his production skills are solid. This is probably one of those albums that many folks aren’t as familiar because, for the most part, he was considered a one-hit wonder at the time. After this album, he worked as a songwriter and producer for a number of artists including Blue Öyster Cult, Jon Bon Jovi, Faith Hill, Céline Dion and Clay Aiken.
Posted by Martin Maenza at 4:30 AM