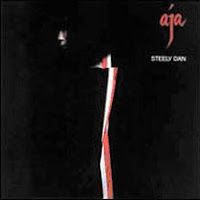 In September of 1977, the American rock band Steely Dan released their sixth studio album entitled Aja. Considered by many as one of their best releases, the record went multi-Platinum in sales and scored them some of their highest chart ratings world-wide; it went to number 35 in Sweden, number 10 in Norway, number 9 in Australia and the Netherlands, number 5 in the UK, and number 3 on the US Billboard Hot 200 chart.


The album won the 1978 Grammy Award for the Best Engineered Non-Classical Recording. Rolling Stone magazine ranked the album at number 145 on its list of the 500 Greatest Albums of All Time. It also appears on the list of 1001 Albums You Must Hear Before You Die.

Side one begins with “Black Cow”. Walter Becker lays down a funky bass groove with the cool drum beats of Paul Humphrey, setting the perfect mood for Donald Fagen’s laid back vocal style. All together, they create a relaxed, jazzy number that is as chill as the ice cream soda that the lyrics refer to. The song served as the B-side to the third single.

The title track is next. “Aja” (pronounced like “Asia”) opens with Fagen tickling the ivories. Steve Gadd is the drummer. There are so many great layers going on in this eight-minute track, including a number of Far East influences. I am especially fond of the horn solos.

“Deacon Blues” uses the backdrop of college football, between the University of Alabama Crimson Tide and the Wake Forest Demon Deacons, to compare winning and losing in life. This second single from the album went to number 19 on the US Billboard Top 40. Pete Christlieb delivers the memorable saxophone solos on this one.

Side two opens with “Peg”, the first single from the album; it rose all the way to number 11 on the US Billboard Top 40. I really like the swing to this one; it always puts me in a great mood. The lyrics pay homage to a lovely lady, very photographic woman. Michael McDonald was one of the backup singers on the track.

“Home at Last” was the B-side to the second single. The lyrics talk of finding one’s self with the music providing an exotic, existential soundtrack for the road trip.

“I Got the News” served as the B-side to the second single. I like the bounce of the piano on this one and how it keeps tempo with the drums. Again, Becker lays out the funk on the bass.

The final track on the album was also the third and final single. “Josie” went to number 26 on the US Billboard Top 40. Here, the guys go a bit more into the rock genre while keeping the jazz accents as well (as can be heard on the chorus).

I was twelve years old when Steely Dan released Aja and very much in my Top 40 and disco phase. The singles from the album certainly qualified for the former category, and the funk bass elements lent themselves slightly to the later. Admittedly, at the time I was not likely to appreciate all the musical goodness this whole album had to offer.

As an adult, though, I can see the intricacies and complexities put into the production of this record. The music is very tight, polished and precise. That makes for a sold album from the first cut to the last. This record is wonderful ambiance music to listen to while kicking back to enjoy a good glass of wine and great company.
Posted by Martin Maenza at 6:57 AM

My college best friend and I used to sit up late into the night, smoking cigars and listening to "Deacon Blue".

I have happy memories whenever I hear Steely Dan -- but especially from Aja and Gaucho.

Derrick, thank you as always for sharing your thoughts and memories associated with albums. I appreciate them.