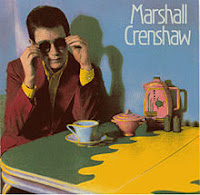 Today (April 28th) is the 30th anniversary of the release date of the 1982 self-titled debut album from Detroit singer, songwriter and guitarist Marshall Crenshaw. He played lead guitar and provided the vocals on the record, while his brother Robert Crenshaw played drums and Chris Donato played bass.

Marshall Crenshaw spent over six months on the US Billboard Hot 200, peaking at number 50. It went on to reach multi-Platinum sales status in the US and has continued to be available in print over the decades. Rolling Stone magazine ranked it number 72 on its list of the 100 Top Albums of the 1980's.


Side one starts with "There She Goes Again", a poignant song about seeing someone you love having moved on to another and realizing that you need to too.

"Someday, Someway", the album's most known track, went to number 36 on the US Billboard Top 40 chart during the summer of 1982 thanks to it inclusion on the soundtrack of the movie Night Shift. This is a favorite song of mine from this year - a four star track in my iTunes. I really love the rhythm of this one with the hand-claps, the guitars and drums. The lyrics lament on the difficulty guys have understanding women sometimes. The tune has a bit of a Buddy Holly sound to it, giving it a comfortable classic rock vibe.

The guys get some great vocal harmonies going on the opening of "Girls". This song screams summer time to me. It brings up images of cruising the local hot spots and watching all the lovely ladies out having a good time. The percussion has a couple of really cool layers to it too.

On "I'll Do Anything" Marshall conveys well the hapless man in love, willing to do whatever it takes to win the heart of the girl. Even with simple utterances like “yeah yeah”, “uh huh”, and “no no” he conveys some much sincerity and intention.

"Rockin' Around in N.Y.C." is up next. While a pleasant enough tune, this is the first tune on this side that doesn’t grab me as much as the others. It has quite a few stop-pause-go moments in it; it is perhaps that rhythm that is what throws me off a bit.

"The Usual Thing" goes back to the Holly country-rock rhythm for this song about being true to one’s self and not spend so much time doing what is predictable.

Side two opens with the kicked up tempo of "She Can't Dance" about a gal who loves music even though she has no musical talent or rhythm of her own.

"Cynical Girl" is all about those times when you just need a change of pace, a person who is outside of the fringe of the usual people in your life.

On "Mary Anne", he attempts to cheer up a girl who is down. Listening to this one, I can’t help but wonder Marshall‘s music inspired Ben Folds. This song reminds me a bit of the work by the later artist from the 90’s.

"Soldier of Love (Lay Down Your Arms)" has such a catchy musical hook to it that it easily is my second favorite on the album. It has a bit of an early 60’s Beatles feel to it that I like quite a bit.

"Not For Me" is next. Something about the fifth tracks on each side of this album is not clicking with me. Again, we have another perfectly penned pop-rock song here. But as its title says, this one is just not for me. Ah well. Law of averages at work.

Curiously, "Brand New Lover" closed out the vinyl edition of the album but it does not appear on the re-mastered CD version. I wonder why. I did locate the song on YouTube and found it to be very catchy and full of energy. I’d even say it was my second favorite track on the second side.

Today also happens to be the fifty-first birthday of my older brother Fred who was the one who exposed me quite a bit to this album. I can remember him coming home from college that summer between my Junior and Senior years of high school with this one in tow on vinyl. I also remember that both the local college radio station and the album-oriented rock station out of Buffalo picked up on playing many of the tracks as well.

If you’re looking for some solid power pop-rock songs, cleanly executed, then look no further than Marshall Crenshaw.
Posted by Martin Maenza at 5:09 AM

Great to read this post. Hard to believe it was 30 years ago! When I listen to this album today, it still sounds fresh and vibrant, unlike so much of the short-shelf-life music of that era.

Have you been keeping up with Crenshaw's music since? I have to say, his 2009 album Jaggedland was one my top 10 albums of that year -- simply fantastic.

Holly, I will have to seek that one out. Thanks for recommending it to me.