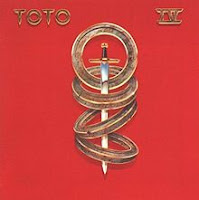 After a cooled reception to 1981’s Turn Back, 1982’s Toto IV put the group back on the charts. The album easily broke the top twenty in all markets; it was number 17 in Sweden, number 16 in France, number 12 in Germany and Finland, number 9 in New Zealand, number 4 in the UK and the US Billboard Hot 200, number 3 in Japan, number 2 in Norway and number 1 in the Netherlands. The record also scored the group their first number 1 single.


Side one opens with “Rosanna”, the first single from the album. The song went all the way to number 2 on the US Billboard Top 40, a spot it held for five weeks. It was not able, however, to get past the Human League’s “Don’t You Want Me” or Survivor’s “Eye of the Tiger”. Outside the US, it went to number 24 in Germany, number 22 in New Zealand, number 16 in Australia, number 12 in the UK and number 6 in the Netherlands.

Even though the band’s keyboard Steve Porcaro was dating actress Rosanna Arquette at the time, the song is not about her. David Paich had written a song about a former girlfriend but liked Arquette’s first name enough to use it for the song. Musically, the track has an instantly recognizable shuffle from David Hungate’s bass and Jeff Porcaro’s drums. It also features Tom Scott and Jim Horn on saxophones, and Gary Grant and Jerry Hey on trumpets. I like the keyboard and guitar interplay at the end of the track.

The second single “Make Believe” only got to number 30 on the US Billboard Top 40. I like Paich’s keyboards at the start. Bobby Kimball takes lead vocals on this sweet but sad number about a love affair on the rocks. The lyrics recall fondly the good times and make a plea to forget the problems in hopes to recapture that loving feeling again. The song resurfaced in 2006 on the soundtrack to the video game Grand Theft Auto: Vice City Stories.

“I Won’t Hold You Back”, the fourth single, went to number 37 in the UK and number 10 in the US Top 40. It did score a number 1 on the US Adult Contemporary charts. This beautiful ballad, written and sung by guitarist Steve Lukather, has a rich orchestral arrangement and also features Timothy B. Schmit of the Eagles singing backing vocals on the chorus.

“Good For You” was the B-side of the third single outside of Europe. The song features a strong synthesizer sound and wonderful vocal harmonies. Mike Porcaro plays the cello on this one.

“It’s a Feeling” served as the B-side to the first single. Steve Porcaro wrote the track and provides the lead vocals. This one has a smooth swing to it, thanks to the keyboards and supportive percussion.

Side two begins with “Afraid of Love”, the B-side to the fourth single. With its harder rocking sound, it is no surprise that it went to number 28 on the US Mainstream Rock play lists.

“Lovers in the Night” was the B-side to the fifth single. It reached number 57 on the US Mainstream Rock play lists.

“We Made It” was the B-side of the second single and the B-side of the third single in the European market. The lyrics are about taking another chance on love in hopes that it can be good again as it was before.

“Waiting for Your Love” was the fifth and final single in 1983. It only got to number 73 on the US Billboard Hot 100. The song goes with a funkier, mid-tempo groove.

The third single “Africa” went all the way to number 1 on the US Billboard Top 40 (ending Men at Work’s four week run with “Down Under”). Outside the US, it went to number 18 in Finland, number 14 in Germany, number 8 in New Zealand, number 5 in Australia, number 4 in the Netherlands and number 3 in the UK. The song features a multi-layered percussion sound that includes congas, marimbas, bass drum, snare drum, a shaker and cowbell.

Toto IV won six Grammy Awards for the band. These included Record of the Year for “Rosanna”, Album of the Year, and Producer of the Year.

As a Top 40 fan during my high school years, I had plenty of radio listens to the singles from Toto IV. I have always liked those songs and find them to still be tracks I enjoy to this day. I like the big sounds that Toto has thanks to rich musical arrangements. I recently picked up the CD at a bargain (five dollars) and was very pleased to add this record to my digital music rotation. I think it is a solid record from start to finish.
Posted by Martin Maenza at 4:30 AM