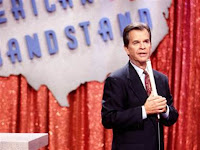 After spending an entire day in a company meeting, I flipped through my Twitter feed to learn of the passing of an American icon. This morning in Los Angeles, California, Dick Clark (age 82) passed away after a heart attack.

As a kid of the 70's, I grew up watching Dick Clark all the time.


Every weekday I would watch as he hosted the $10,000 Pyramid game show. Whether over at my grandmother's house, hanging out with my cousin or just at my house, this was a favorite. I can always remember that during the final pyramid round how he would come over at the end and see if he could offer up clues that would have helped the contestant get those categories that stumped them.

Every Saturday afternoon at 12:30pm, I would tune in for American Bandstand. He always had the best guests, playing the biggest hits and introducing some of the newest chart entires on the "Rate A Record" segment.

I can even remember when he started the New Year's Rockin' Eve broadcasts. How cool it was to finally be able to stay up past midnight on December 31st to watch them (and not have to watch Guy Lombardo when we'd spend the evening at my grandmother's house while my parents were out).

What made Dick Clark so relatable, for me, was his easy-going nature and comfortable conversaton with whoever he was talking to - musician, celebrity, teenager, whoever. He was someone you knew you could trust. He just had that kind of aura about him.
Posted by Martin Maenza at 5:28 PM