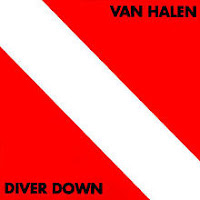 Diver Down sold over four million copies in the US and spent sixty five weeks total on the US Billboard Hot 200 album charts. It reached the number 3 spot on that chart; it also went to number 5 in Canada, number 19 in Norway, number 28 in Sweden and number 36 in the UK. Many of the tracks also charted on the US Mainstream Rock singles charts.


The cover of the album is the image of the flag used in most US jurisdictions that indicates a diver is currently active in the area, advising nearby boats to stay clear.

Side one opens with “Where Have All the Good Times Gone”. This was the second Kinks song that Van Halen covered on one of their albums; the first was on their self-titled debut (click here for that review). Eddie Van Halen and Michael Anthony, on electric guitar and bass respectively, give the 1965 song a whole new facelift. The song proved popular on the US Mainstream rock charts, climbing as high as number 17.

Alex Van Halen delivers one of his rapid-fire rhythms for “Hang ‘em High”, challenging his brother to keep up. Eddie is more than up to the task, as always. The guys really jam on this song about the adventures of a hell-bent biker.

"Cathedral" is the first of three instrumentals on the album. Eddie makes his guitar sound just like a church organ.

“Secrets” has a more laid back groove to it, and the lyrics tell of a mysterious yet enticing woman. This kind of song is perfect for David Lee Roth’s whisky-soaked crooning. The song rose to number 22 on the US Mainstream Rock charts.

"Intruder" is a little over a minute-and-a-half instrumental that is driven by Anthony on bass. It is the perfect lead-in to the next track.

“(Oh) Pretty Woman” is a cover of the 1964 song by Roy Orbison. The guys really rip into this one, giving it a hard-rocking edge. The track was the first single from the album, going to number 12 on the US Billboard Top 40 (their highest ranking single there to date), number 1 on the Mainstream Rock charts for two weeks, and number 5 in Canada.

Side two starts off with “Dancing in the Street”, a song that was first recorded by Martha and Vandellas in 1964. Eddie put a lot of work into the synthesizer arrangements on the track to put a new spin on this Motown classic. I really like that opening sequence; it clearly gives it an 80’s sound that mixes hard rock and new-wave. The backing vocal harmonies though tie in that classic sound though, bringing it all full circle. As the second single, it barely broke the US Billboard Top 40 (it stalled at number 38), yet it went to number 15 in Canada and number 3 on the US Mainstream Rock charts.

“Little Guitars” comes in two parts - a forty-two second intro followed by the song itself. The opening has a flamenco guitar sound to it, once again showing Eddie’s versatility. The song then shifts into a rocking rhythm. Dave fittingly sings about a senorita with whom he is in love. I like the “catch as catch, catch as catch can” of the chorus. Another US Mainstream Rock charter, this one went to number 33.

"Big Bad Bill (Is Sweet William Now)" was written in 1924 by Milton Ager. The lyrics tell of a rough character known for fighting and causing who, once he gets married, settles down and becomes a perfectly domesticated male. Jan Van Halen, Eddie and Alex’s father, sits in on the clarinet for this track and gives it that extra cool jazz element. It is the last thing you would expect on a rock album but, for me, it works. I like surprises like that.

“The Full Bug” opens with a bit of a ZZ Top vibe with Roth on the acoustic guitar and harmonica. It then opens into a down and dirty little ditty.

"Happy Trails" was written by Dale Evans for the radio show she and husband Roy Rogers had in the 1940's and 1950's. Van Halen often ended their live shows with this a Capella cover. Dave really hams it up on this one as he was known to do. You can tell they were having fun with it.

Critically, Diver Down did not go over too well. Many felt that the covers watered things down and left little real meat that the earlier records of Van Halen had. Given that the band knocked out the recording of the album in twelve days, you can tell they were just trying to throw something together after coming off a big tour to keep their music out in front of the fans.

For me, I always enjoy a good cover song. So, Diver Down works in that respect. I consider it a light appetizer before the big meal that would come with their sixth album 1984 (click here for my review of that album).
Posted by Martin Maenza at 4:30 AM