Cheap Trick - One on One 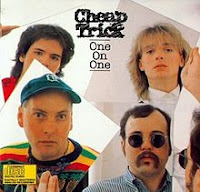 Today (April 30th) marks the 30th anniversary release of Cheap Trick's sixth studio album. One on One from 1982 went to number 39 on the US Billboard Hot 200, number 77 in Japan and number 25 in Australia. Produced by Roy Thomas Baker, it was the first album by the group to feature new bassist Jon Brant (Pete Comita who joined the group in 1980 left during the initial recording sessions for this record).


Side one opens with "I Want You", which was released as the fourth single but only in Europe. It went to number 48 on the Dutch charts. This one about obsession is full of energy and attitude that kicks things off on just the right note.

The title track "One on One" starts with a solid Rick Nielsen guitar solo. I also like how the guitar builds on the middle bridge.

"If You Want My Love" was the first single from the album; it went to number 45 on the US Billboard Hot 100, number 11 on the US Mainstream Rock chart, number 57 in the UK and number 2 in Australia. This ballad is a bit sleepy with a slight Beatles-like sound to it, quite a contrast from the first two more rocking numbers.

With "Oo La La La", drummer Bun E. Carlos picks up the tempo a bit to wake us up.

"Lookin' Out For Number One" was released on the B-side of the Europe-only fourth single.

The second single, "She's Tight", starts side two; it went to number 65 on the US Billboard Hot 100. I really like the stop-go rhythm of this one, how it winds things up only to let them go wild.

"Time is Runnin'" is next. For me, this one is just kind of there. Not a lot jumps out from it that makes it very individual or memorable for me.

"Saturday at Midnight", the third single, failed to make any noticeable waves on the charts. It did go to number 45 on the US Billboard Dance Music/Club Play chart though. The track does have a bit of new-wave/Devo sound to it thanks to Robin Zander’s keyboards. I think they do a good job dipping into this musical trend.

"Love's Got a Hold on Me" was released on the B-side of the third single. This track about being caught up in love has a bouncy rhythm to it.

"I Want Be Man" is very weird in its industrial, mechanical sound in the music and the vocals. This story of a mechanical servant wanting to be human is manic but also somewhat interesting.

"Four Letter Word" was the B-side to the first single. I like the echoing effects of the music here, giving it an almost-live sound to it.

In 1982, a lot of my exposure to Cheap Trick came from the album-oriented rock stations that played their big hits of the 70’s and from MTV, which was a perfect medium for Nielsen’s madcap antics while he played his axe. One on One is a good record with some standout tracks. If I were stocking my music library with offerings by the band, a few albums would be well ahead of this one on the purchasing list though.
Posted by Martin Maenza at 4:24 AM