Frank Zappa - Ship Arriving Too Late to Save a Drowning Witch 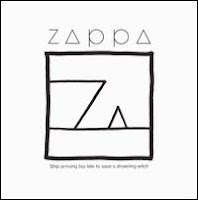 Thirty years ago this week (May 3rd, 1982, to be precise), Frank Zappa released his thirty third album. With only six tracks to it, Ships Arriving Too Late to Save a Drowning Witch not only had a very intriguing title but it also had an interesting format. One side of the album featured studio cuts and other side featured live cuts.

The album went to number 23 on the US Billboard Hot 200. In the UK, it reached number 61. And in Norway and Sweden it went to numbers 20 and 26 respectively. And, it featured Zappa’s best selling single in the US.


Side one, the studio side, opens with “No Not Now”. I like the funky bass by Arthur Barrow on this one, which gives it a nice groove. The lyrics are about a sexual charged woman who can’t decide who will be her partner for the night.

Next up is “Valley Girl”, a song Zappa co-wrote with his then fourteen year old daughter Moon Unit. Her insights into the teenaged “Valley speak” was meant to lampoon the California dialect but instead made it much more popular across the country. She provides the track’s “verses”. The single went to number 32 on the US Billboard Top 40 and number 12 on the Mainstream Rock charts. I was a huge fan of this one back in 1982 and owned the 45 of it. My best friend John and I would so do the “Val-speak” is such a sarcastic, irreverent manner. It was so easy to pepper in those “omigods”, “likes”, “grodys” and “totallys” into every day conversation.

“I Come from Nowhere” features a solid guitar and percussion groove to it. Both Patrick O’Hearn (of Missing Persons) and Arthur Barrow contribute on the bass for this jam session.

Side two, the live side, begins with the twelve minute long, mostly instrumental “Drowning Witch”. The album’s title comes from the opening line of this song which tells an odd tale told over the first two minutes. It then devolves into a carnival of sounds and stanzas with many layers that beg for multiple listens to enjoy them all.

The instrumental “Envelopes” has a weird sci-fi vibe to it thanks to the keyboards and, what sounds like, a xylophone.

Singer Lisa Popeil provides the vocals on the final track “Teen-Age Prostitute”. Sung in an operatic voice along with Zappa, it tells the tale of a seventeen year old runaway who works the streets to make money. The music that accompanies it is rather manic, like an orchestra on speed.

Ships Arriving… is hardly a conventional rock record but then again Frank Zappa is hardly a conventional rock musician. As this record shows, he can weave together some complex compositions that are a feast for the ears and the mind. He was also able to create something so ironically mainstream too (“Valley Girl”), which likely got a number of people to try his music for the first time.

As I noted before, I definitely fell into that later category. I was roped in by “Valley Girl” though I did not venture beyond that. However, giving the album a listen for this review I definitely can say I like what I hear. It is different, sometimes quirky, yet always very interesting.
Posted by Martin Maenza at 4:38 AM

Excellent review. FZ is my absolute favorite. Thanks for tackling something not in constant 4/4 time. ;)