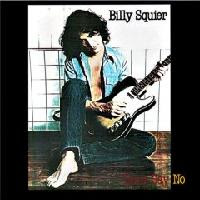 The Massachusetts born Squier was inspired to become a musician after seeing Eric Clapton and Cream perform in 1968. In the early 70’s, he played with a band called Piper who released two albums. From there, Squier signed with Capitol Records and released his first albums solo albums in the 80’s.


On April 13th, 1981, he released his second studio album Don’t Say No which kicked his career into over-drive. It was certified Gold by July of that year and Platinum two months after that; all in all it sold over three million copies and made it his best-selling release in the US. The album went to number 5 on the US Billboard Hot 200 and remained on those charts for one hundred and eleven weeks. The record also spawned some of the biggest hits of his career.

Side one begins with “In The Dark”, which was released as the second single; it went to number 35 on the US Billboard Hot 100, number 7 on the US Mainstream Rock chart, and number 22 in Canada. The lyrics of this hard rock track allude to the buried emotions and secrets people are afraid to reveal except, perhaps, within the safer cocoon of night with a lover.

The first single was “The Stroke”, which climbed to number 17 on the Billboard Hot 100, number 3 on the Mainstream Rock chart, and number 22 in Canada. The rhythm of this one, with the guitars and percussion, really drive this rocking classic. While many might say the lyrics have a strong sexual nature to them, I can see it also talking about having confidence to strut your stuff on stage with a guitar. Most likely, though, there is that whole double entendre going on here.

“My Kinda Lover”, the fourth and final single, hit number 45 on the Billboard Hot 100 and number 31 on the Mainstream Rock chart. This one is a very masculine expression of love.

“You Know What I Like” has a thundering rhythm to it thanks to Bobby Chouinard on drums. The lyrics celebrate the perfect woman, one who fulfills every fantasy.

“Too Daze Gone” served as the B-side to the first single. This one has more of a throwback rock sound to it, no doubt inspired by Squier’s early rock idols. He tickles the ivories on this one, showing his piano playing abilities. The lyrics reflect upon a time of hanging out and partying, with time passing in a blurring haze.

Side two starts with “Lonely Is the Night”; as the third single it only charted at number 28 on the US Mainstream Rock chart. I like the opening that starts with just Squier and his guitar, before the rest of the band joins in. This is one of those songs that sounded great cranked from your car stereo as you cruised around town on a Saturday night, looking for something to do.

“Whadda You Want From Me” was the B-side to the second single. It has a rapid-fire rhythm and a down-and-dirty guitar groove. This one is probably my favorite of the non-single tracks from the album; I really like the way it moves.

Squier slows things down a bit with “Nobody Knows”, a more introspective track. He sings this one in a higher register, accompanied for the first half by just his guitar. The song was dedicated to the late John Lennon who had been killed at the time Squier was working on the album.

“I Need You” also sticks with a more laid back sound. The album closes with the title song “Don’t Say No”, a plea for an honest relationship. These last songs don’t do as much for me as the earlier tracks.

I can remember quite well when this album was on the charts. I was in the middle of my high school years, and the tracks from Don’t Say No were in heavy rotation on the album-oriented rock station we listened to from Buffalo. The first cuts on side one made a perfect rock-block segment on weekends where they would play three in a row by the same artist back to back to back. Billy Squier’s music carried on the rock legacy of groups like Led Zeppelin, and many in school loved the sound. My older brother still has a copy of this album on vinyl.
Posted by Martin Maenza at 4:30 AM