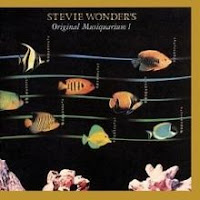 Today (May 4th) marks the 30th anniversary of Stevie Wonder's compilation album Stevie Wonder's Original Musiquarium I. This 1982 release gathers together many of Wonder's biggest hits from the period of 1972 to 1980. The double-record set, which also included four brand new tracks, peaked at number 4 on the US Billboard Hot 200 chart and number 1 on the US Billboard R&B chart. It also reached number 8 on the UK charts.


Side one starts with "Superstition" from the 1972 album Talking Book. The song was a number 1 hit on both the US Billboard Top 40 and on the R&B charts; it went to number 11 in the UK. I just love the funky clavinet and bass riff that opens this one and permeates throughout the track. Rock guitarist Jeff Beck came up with the original drum beat for it.

From 1974's Fulfillingness' First Finale comes "You Haven't Done Nothin'". This song, which features backing vocals by the Jackson 5, hit number 30 in the UK and number 1 on both the US Top 40 and R&B charts. The lyrics take direct aim at former President Richard Nixon in one of Wonder’s angriest political statements.

A slight different version of "Living for the City", originally on 1973's Innervisions, is next. The song went to number 15 in the UK, number 8 on the US Billboard Top 40 and number 1 on the R&B charts. This is another social commentary song, this time about life in the ghettos and young people having to do unthinkable things to get by. It features a slow bass synthesizer groove to set the tone for the track.

The first of the new tracks was "Front Line". This strong statement about veterans and how they are treated poorly today features a driving groove.

Side two takes off with "Superwoman (Where Were You When I Needed You)" from 1972's Music of My Mind. As a single it went to number 33 on the Billboard Top 40 and number 13 on the R&B charts; the version here is the nearly eight-minute album track that has two very distinct parts. The lyrics have been said to reflect upon Wonder’s first marriage with Syreeta Wright, a Motown secretary turned singer.

"Send One Your Love" comes from 1979's Journey Through the Secret Life of Plants; the single went to number 4 and number 5 on the Top 40 and R&B charts respectively. It also spent four weeks at the number 1 spot on the US Adult Contemporary charts. This beautiful ballad is one of the few tracks on the documentary soundtrack that was not pure instrumental. I can remember this one getting quite a bit of radio airplay back in the day.

Also from Talking Book comes "You Are the Sunshine of My Life"; the single went to number 1 on the Billboard Top 40, number 3 on the R&B charts, and number 3 in the UK. It won him a Grammy Award for Best Male Pop Vocal Performance in 1973. The opening four lines of the song are sung by James Gilstrap and Gloria Barley.

The side closes with the new track "Ribbon in the Sky", which was released as a single in 1982. It only charted on the US R&B charts, going to number 9. This track earned Wonder a Grammy nomination for Best Male R&B Vocal Performance. I like this love ballad that features Wonder at the piano, just his voice and the ivories.

Side three takes us to "Higher Ground", from Innervisions. This single, which Wonder wrote in a three-hour session, only reached number 29 in the UK but hit number 1 on the US R&B charts and number 4 in the Top 40. The song has an incredible funk groove to it. In 1989, the Red Hot Chili Peppers did a cover of it which has been since used in video games like Guitar Hero and SSX3.

"Sir Duke" first appeared on Songs In the Key of Life from 1976. I had the 45 single of this song; it hit number 1 on both the Billboard Top 40 and R&B charts and number 2 in the UK. The opening horns immediately pull me in every time I hear it. The lyrics are a tribute to the great jazz artist Duke Ellington, and also make reference to other brilliant contributors to that genre like Count Bassie, Glenn Miller, Louis Armstrong and Ella Fitzgerald.

From 1980's Hotter Than July comes "Master Blaster (Jammin')", a number 1 R&B (for seven weeks) and Dance charts hit. It went to number 3 on the Top 40 in the US and number 2 in the UK. The song has strong reggae influence as it serves as an ode to the legendary Bob Marley.

"Boogie On Reggae Woman" first appeared on Fulfillingness' First Finale; the version here does not include the original intro though. This 1974 single went to number 3 on the Billboard Top 40, number 1 on the R&B charts (for two weeks) and number 12 in the UK. Wonder laid down nearly all the instruments on this ode to a sexual provocative woman. I was not familiar with this one back in the 70’s; my big exposure to it was a non-traditional oldies radio station in the Raleigh area that played it a lot in the early 2000’s.

New track "That Girl" closes this side. As the first new single from this album, it went to number 3 on the US Top 40 and number 1 on the R&B charts (a spot it held for nine weeks); it only got as high as number 39 in the UK.

Side four begins with "I Wish" from Songs In the Key of Life; it went to number 1 on both the Top 40 (for one week) and the R&B charts (for five weeks) and number 5 in the UK. The lyrics reflect upon Wonder’s childhood. I really love the horn section on this one that punctuates the lyrics so well.

Also from that album we get "Isn't She Lovely?" which, surprisingly, was not released as a single. Wonder stood his ground against Motown on it being released on a 45. The song is a celebration of the birth of his daughter Aisha.

The side and album closes with the ten-and-a-half minute long jam session "Do I Do" that features a trumpet solo by jazz great Dizzy Gillespie. The shorter single version went to number 7 on the Billboard Top 40 and number 2 on the R&B charts in the US; in the UK it was a number 10 hit. If you have only heard the single version, seek out the longer version as you are in for a musical feast.

As you can see, Stevie Wonder’s Original Musiquarium I is a fantastic collection of tracks that span a decade of music by a true master. The four new tracks fit perfectly with the classics. If you only add one Wonder album to your music library, I would strongly advocate that this be the one.
Posted by Martin Maenza at 4:30 AM