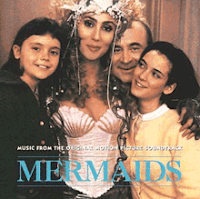 Welcome to another edition of Soundtrack Sunday. Today (May 20th) is also the sixty-sixth birthday of an American singer, actress, television star, director and winner of an Oscar, Grammy and Emmy. Of course, I can only be talking about the one and only Cher.

In December of 1990, Cher starred along side Bob Hoskins, Winona Ryder and Christina Ricci in the comedy-drama Mermaids. The story is about fifteen year old Charlotte Flax (Ryder) who lives with her eccentric mother (Cher) and younger sister Kate (Ricci). The film did well at the box office, clearing over $110 million.


Released at the same time as the film was the soundtrack album. Mermaids peaked at number 65 on the US Billboard Hot 200 charts. It featured a pair of recording by Cher, both which were released as singles, and a number of other early pop-rock classics from the 60’s.

The album opens with “The Shoop Shoop Song (It’s in His Kiss)”, a song first recorded in 1964 by Betty Everett. Cher remade the song for this movie, and the single went to number 33 on the US Billboard Hot 100, number 21 in Canada, number 7 on the US Adult Contemporary charts, and number 1 in Australia, Germany, Ireland, Norway, Poland, Sweden and the UK. This one reminds me a lot of the days of watching the Sonny and Cher Show as a kid during the 70’s; doing classic pop songs like this were a main staple for her on the variety program.

Next up is Frankie Valli and the Four Seasons with “Big Girls Don’t Cry”. This classic spent five weeks atop the Billboard Hot 100 in late 1962. Valli uses his strong falsetto for most of the verses.

Smokey Robinson and the Miracles’ smooth “You’ve Really Got a Hold on Me” follows. This one went to number 8 on the US Billboard Hot 100 and number 1 on the US R&B charts in 1962.

Lesley Gore hit number 1 on the US Billboard Hot 100 with “It’s My Party” in 1963. It actually dethroned another song on this soundtrack from that spot (Jimmy Soul’s tune found at the end of the record).

Shelley Fabares’ first pop single was the 1962 “Johnny Angel”. It went to number 1 in the US and Canada, and number 41 in the UK.

Cher’s second track is a cover of “Baby I’m Yours”, originally recorded by Barbara Lewis in 1965. This new version went to number 89 in the UK.

Santo & Johnny’s instrumental classic “Sleepwalk” is next. This steel-guitar based tune was released in 1959 where it topped the US Billboard Hot 100 for two weeks.

Since the story line of the film takes place in 1963, the soundtrack for Mermaids really captures that time period well. These songs representative of what would have been heard on the radio back then, and the mix includes a number of top-sellers to boot.
Posted by Martin Maenza at 3:40 AM