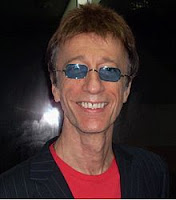 This morning I was listening to the satellite radio in the car (Sirius/XM 70's on 7) and heard an audio clip from a past interview with Robin Gibb. He was remarking at how amazed he was that the music of the Bee Gees was being played at weddings and funerals. He mentioned hearing that "How Deep Is Your Love" records were played in churches as people got married. The interviewer asked him which song of theirs he would have played at his funeral. Without hesitation Robin said "Tragedy", their 1979 hit, and then he added jokingly "Staying Alive just wouldn't work now, would it?"

That's how I felt when I heard the news last night of the passing of Robin Gibb, at age 62, after losing a tough battle to cancer. It is truly a tragedy that we've lost another music legend this year.

Robin had been diagnosed with colon and liver cancer, which he was fighting with surgery and treatment over the last year. However, those only provided a brief respite and gave him just a few more months of time with family and friends. Robin's suffering is now over. He is survived by his second wife Dwina, his sons Spencer and Robin-John, his daughter Melissa, and his older brother Barry.

Born December 22nd, 1949, on the Isle of Man along with twin brother Maurice, the family moved around a good bit. They spent a few years in Manchester, England, before settling for a longer time in Queensland, Australia. It was here that the two along with Barry would get their start as performers by singing on television. In 1963, they signed to their first record label and began to record as the Bee Gees. The rest, as they say, is music history.

My first full exposure to the music of Robin and the Bee Gees came with seeing Saturday Night Fever in February of 1978. The film had been out for a few months with the songs from it burning up the charts. On my thirteenth birthday that month, I got a copy of the soundtrack on vinyl (click here for that review). That was the start of my induction to the fandom. Four months later, the brothers starred in the film Sgt. Pepper's Lonely Hearts Club Band, and another double-record was added to my collection (click here for that review).

In 1979, I got a copy of Spirits Having Flown on vinyl for my fourteenth birthday; it had just been released a few weeks prior that February. A few months later, their tour for the album was announced and I begged my parents to let me go see the show when it came to Buffalo (the closest show venue) on September 14th. I can remember clearly the day my mom and my aunt went to buy the tickets at the nearby college - I kept that ticket in a very special spot on my bookshelf until it was the day of the show. Then, my older cousin Linda took my cousin Joan and I to see the show that autumn night - my first concert. It was an hour ride each way to the Buffalo Memorial Auditorium, but the show was on a Friday night so that was okay. I was truly blown away by the production, the lights, and the sound; the tour recreated the lighted dance floor from Fever. And, of course, there was all that amazing music with the crowd loving it and singing along. It was an amazing night.

That fall, as the tour was winding down, Bee Gees Greatest was released on a double-vinyl set. And, that Christmas, I received a copy as a gift from my family. It covered the songs from their career resurgence from 1975 to 1979. More than half of the twenty tracks were new to me. I discovered what albums those came from, thanks to the linear notes, and soon sought out some of their back catalog. I picked up Children of the World (from 1976) and Main Course (from 1975).

The next album featuring the brothers Gibb that I picked up was the soundtrack to 1983's Staying Alive (click here for that review). It was right after that the guys took a bit of a break from recording, and that would be the last of the vinyl I purchased of their music.

In the early 90's, when my turntable had given up the ghost and I had moved on to CDs, one collection I had to get was Tales from the Brothers Gibb: A History in Song. This four-disk box set was my first in-depth exposure to the group's earliest works. The first disk covers 1967 to 1970; the second covers 1971 to 1974. Between the two, that was forty-two tracks of which only a few I had passing familiarity. Disk three covers the 1975 to 1979 years, a period which I knew intimately from hours upon hours of listening to those records. Disk four covers the 1981 to 1989 period. It was from this set that I learned of Robin Gibb's solo projects through out the years.

The Gibb family is no strangers when it came to loss. Youngest brother Andy died in 1988 as a result of myocarditis. Maurice died in 2003 from complications of a twisted intestine. It was then that Barry and Robin decided to no longer record under the Bee Gees name, though they had occasionally since performed under that banner.

As I tweeted yesterday, I have no doubts that the reunion in Heaven between Robin, Maurice and Andy was a beautiful and touching one. The chorus of the angels now has a sibling three-part harmony that has not been heard for quite some time.
Posted by Martin Maenza at 11:09 AM