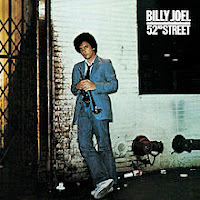 Between his career breakthrough fifth album The Stranger and his seventh album Glass Houses (click here and here respectively for both of those reviews), Joel released 52nd Street on October 13th, 1978.


Like both the above mentioned records, this release went multi-Platinum in sales in the US and Canada. Chart-wise, the album reached number 19 in Germany, number 18 in Sweden, number 10 in the UK, number 5 in Norway, and number 1 in Australia, New Zealand and on the US Hot 200 album charts.

52nd Street spawned a number of hit singles. It also was nominated and won the Grammy Awards for Album of the Year and Best Pop Vocal Performance Male in 1980. In 1982, it was the first commercial album to be released on compact disc. Rolling Stone magazine ranked it at number 352 on its list of the 500 Greatest Albums of All Time.

Side one begins with “Big Shot”, the second single from the album. In 1979, it hit number 13 in Canada and number 14 on the US Billboard Hot 100. The lyrics tell of a woman who spends her evenings flitting about town to drink and socialize. She is a name-dropping, society girl who thinks more of herself than others do. I like the big, bold sound on this track; the music is right there in your face as the lyrics present their accusations.

The third single “Honesty” went to number 16 in Canada, number 24 on the US Billboard Hot 100 and number 9 on the US Adult Contemporary charts. I really like the simple accompaniment to this open, heartfelt song. It is one of my favorites on this album.

“My Life” was released as the first single from the album. It made the Top Ten in many countries (number 6 in New Zealand and Australia, and number 3 in Canada, Ireland and the US). Donnie Dacus and Peter Cetera provide backing vocals on this track. The song was adopted as the theme song to the 1980’s ABC sitcom Bosom Buddies which starred Tom Hanks and Peter Scolari.

“Zanzibar”, a song about a bustling night spot, features a number of guest musicians. Freddie Hubbard plays both the flugelhorn and trumpet, and Mike Mainieri plays the vibes and marimba. Together, this helps give the song a jazz feel.

Side two starts with “Stiletto” and the saxophone of Richie Cannata. This bouncy number is about a deceptive woman who cannot be trusted; she’ll leave waste of your relationship in a heartbeat. And you’ll end up smiling all the while she does so. I love Joel’s piano riffs on this one.

“Rosalinda’s Eyes” brings a bit of a Latin flavor to the record with a gentle swing. I like how all the other instruments fade out at the end, leaving on the percussion.

“Half a Mile Away” was the B-side to the second single. The song has a big sound to it thanks to the horn section conducted by Dave Grushin and the background vocals made up of Frank and Babi Floyd, Zack Sanders, Milt Grayson and Ray Simpson.

“Until the Night”, a song inspired by the music of the Righteous Brothers, was the fourth single from the record and the longest cut on the album (six and a half minutes). This slower ballad with a 60’s sound only charted in the UK, peaking at number 50.

The album closes with the title track “52nd Street”, which was also the B-side of the first single. The song title has a number of important references for Joel. The CBS record label building was located in New York City on 52nd Street. The studio the album was record at was also on that street. And, of course, the song references the important jazz music center of the Big Apple in the middle of the 20th Century.

I owned a copy of 52nd Street on vinyl, the first full Billy Joel album in my collection. If I am not mistaken, I got it for my fourteenth birthday in 1979 from someone in my family (which is something that happened a lot during my teenage and college years).

I remember fondly too how at our Junior High School variety show one of my classmates Jim Mitchell sang “My Life”. The school faculty forced him to censor the lyrics as bit though as they felt it was inappropriate for a fourteen year old to sing about sleeping with someone. Jim still did an awesome job with the song.
Posted by Martin Maenza at 4:30 AM

Excellent, I love this blog-it was very informative and personal at the same time. Keep up the great work!