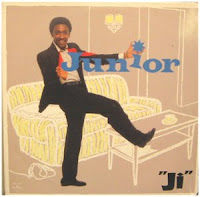 The 80’s R&B singer who went by the name Junior was born Norman Giscombe in London, England. From 1980 to 1982, he was a backing vocalist for a British soul/funk band named Linx. The charismatic singer soon decided to go solo and recorded his own album.

Thirty years ago this month, Junior released Ji. The album went to number 28 in the UK, number 71 on the US Billboard Hot 200 and number 15 on the Billboard R&B charts.


Side one opens with his most known song “Mama Used to Say”. The single went to number 30 on the US Billboard Hot 100, number 2 on the US Billboard R&B charts and number 7 on the UK charts. This coming-of-age song has an enticing guitar riff and bouncing piano line while Junior’s voice range goes from the high notes of the verses to the guttural growls of “Mama” in the chorus. This was one of those songs that I would dance around my bedroom to as a teenager whenever it came on the radio. It was quite infectious.

It is followed by “Love Dies”, a song about a relationship that has fallen apart.

“Too Late” was the second single; it went to number 20 in the UK and number 8 on the US R&B charts. This smooth break-up song has a solid mid-tempo beat to it. The melancholy, jazz-twinged guitar solo towards the end works very well.

The slow-jam “Is This Love” is next. It has a strong synth-keyboard element to it.

Side two begins with “Let Me Know”, the third single from the album which topped out at number 53 on the UK charts. This song about young first-time love is another very danceable track with a big, powerful sound.

Next up is “Down Down”, followed by “I Can’t Help It” which was the B-side to the third single.

The album closes with “Darling You (Don’t You Know)”, a slow, sensual thank you to a woman who opened up a whole new world to him.

Ji was another one of those hard to track down albums from 1982. While it did okay back in the day, clearly the record studios don’t feel it deserved any kind of re-issue on CD and digital formats. Sure, you can find a 1995 “Best of Junior” collection but it does not represent this album very well.

And that is a real shame as Junior clearly had a strong following in the UK and a solid R&B groove going with this record. Of the tracks I could locate online to listen to, I enjoyed them quite a bit. This was certainly the kind of music I would have been listening to back in my later high school days. If you own a copy on vinyl or cassette and enjoy it, please drop me a comment and let me know.
Posted by Martin Maenza at 4:30 AM

Hi there! I happened to find your post while in the middle of recording this LP to my computer! I found the record in a local Goodwill and think it's pretty fantastic! Alot of unexpected moments for an R&B record, let alone one from 1982.