Squeeze - Sweets from a Stranger 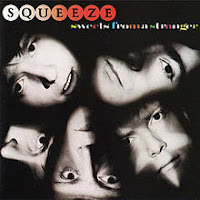 This month marks the 30th anniversary of the release of Sweets From a Stranger, the fifth studio album by the UK band Squeeze. The album went to number 20 in their native UK, number 26 in Canada and number 32 on the US Billboard Hot 200 album charts. All of the tracks were written by Chris Difford (guitars and vocals) and Glenn Tilbrook (guitars, keyboards and vocals). The band split up for awhile after the world tour to promote the album, re-uniting again in 1985.


Side one opens with driving rhythms of "Out of Touch" that create an anxious mood that fits perfectly with the lyrics. They tell of a cold, indifference that has developed in a relationship.

"I Can't Hold On", with its bouncy beats, paints a vivid portrait of attraction.

"Points of View" is a mid-tempo ballad that compares two people at different points in their lives and what happens when they try to come together.

I like the interesting musical effects that come from the keyboards on "Stranger Than the Stranger on the Shore".

Gilson Lavis‘ precise percussion is in the fore-front of "Onto the Dance Floor", a track about a marriage proposal. However, the singer finds himself regretting this action the moment they say “I do”.

"When the Hangover Strikes" was the second single from the album. This one, with its cool jazz, closes out the side with a very mellow mood.

Side two begins with "Black Coffee in Bed", the first single from the album. In the UK, it reached number 51; in the US it stopped at 103 on the Billboard Hot 200 and number 26 on the Mainstream Rock charts. The backing vocals include guests Elvis Costello and Paul Young. The video points to the lyrics being in reference to a rebound relationship with an interracial flavor. The track is the longest of the album, clocking in at over six minutes, but it is so well-crafted that it does not feel long in the slightest. It is definitely my favorite from the record.

"I've Returned" was released as a single in the Netherlands only. The up-tempo track is about waking up after a morning of drunken exploits and having to apologize for one‘s actions. The string arrangements my Del Newman add an heir of sophistication to the whole thing.

"Tongue Like a Knife" tells the tale of a man trying to impress a wealthy empress when he is clearly out of her class. Near the end, I like how I picked up a slight bit of a riff from Rodgers and Hammersteins’ “My Favorite Things”.

"His House Her Home" is about a man who is involved with a married woman with a young son.

"The Very First Dance" is the tale of a stripper and the man who has fallen for her. The music on this one has an interesting rhythm that gives it an unsettling, almost disturbing mood.

"The Elephant Ride" closes out the record.

My older brother bought a copy of Sweets from a Stranger on vinyl back in 1982. From him and from the local college radio station, I became a fan of Squeeze thanks to tracks from this album and those that came before it.

What I have always enjoyed about Difford and Tilbrook’s compositions are that they are such powerful pop songs with great melodies and wonderful word-play in the lyrics. For me, they are right up there with Lennon-McCartney in the category of song-writing partnerships.
Posted by Martin Maenza at 4:30 AM