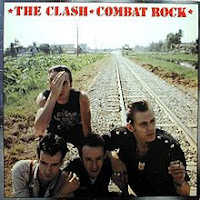 Today (May 14th) marks the 30th anniversary of the release of the fifth studio album by the Clash. Combat Rock was originally planned as a seventeen-track double album with the title Rat Patrol From Fort Bragg but was cut back a twelve song single album during production.

Chart-wise, it reached its highest spot in the rock band's native UK, number 2; it also went to number 12 in Canada, number 9 in Sweden, and number 7 in Norway. In the US, it peaked at number 7 on the Billboard Hot 200 and spent sixty one weeks on the chart total.


"Know Your Rights" is the first track on side one. It was also the first single to be released from the album; it went to number 43 on the UK charts. The lyrics are delivered from the standpoint of an authoritative administration governing over the populace. I like how the song starts out with a loud banging as if on a pipe, to draw everyone's attention. The sledge-hammer, pounding rhythm draws on the group's angry punk roots.

"Car Jamming" is a gritty, urban tale of drugs and corruption set to a grinding groove. Joe Strummer’s then girlfriend Ellen Foley, noted for her work in the late 70's with Meat Loaf, provides backing vocals on this track.

"Should I Stay or Should I Go", the second single from the album, went to number 16 in Ireland, number 17 in the UK, number 40 in Canada and number 45 on the US Billboard Hot 100. It had a strong showing on the US Mainstream Rock Tracks chart where it peaked at number 13. It is a song about being at a cross-roads, a point of deciding to make a change or keep things as they are. This one was popular during my senior year of high school; it was one of those songs that played at parties, school dances and the local bars a lot. That repeated guitar riff revs me up every time I hear it.

The third single "Rock the Casbah" was the biggest hit from the album. It went to number 8 in the US, both the Hot 100 and the Dance charts, number 4 in New Zealand and number 3 in Australia. The lyrics tell of a fictional Middle Eastern ruler placing a ban on rock music and ordering attacks on those who listen. His pilots, however, are too are partaking in the forbidden tunes in their cockpits. This was another favorite dance track back in my high school days. Topper Headon provides the familiar piano riff on this one.

"Red Angel Dragnet”, inspired by the New York City citizen patrol the Guardian Angels, has a funky rhythm to it. Strummer's vocal accent is a bit heavy here, almost as if he were playing a character.

"Straight to Hell", a song about social injustices, addresses economic issues in England, racial alienation, and immigration. Headon lays down the syncopated beats for the others to follow with their plucky guitars imitating an Asian melody.

Side two opens with "Overpowered by Funk", a full-on dance track complete with a guest rap by Futura 2000, a New York City graffiti artist. This track is a great preview of what we would later see by Mick Jones as part of Big Audio Dynamite. The lyrics talk about aspects of the western world, with a counter response that is often "funk out". Paul Simonon's bass on this one is outstanding.

"Atom Tan" slows things down to a winding, moderate tempo; the lyrics talk of incidents that would be reported on the evening news. I'm not a big fan of this track as it seems a bit incomplete to me for some reason. It sort of just trails off in the end.

"Sean Flynn" opens on a light, airy note that calls to mind a babbling countryside brook. Gary Barnacle plays saxophone on this track. The lyrics tell of a photographer who has experienced the horrors of the Vietnam War.

"Ghetto Defendant", with spoken word by noted American poet Allen Ginsberg, is a marriage of beat poetry and a musical ballad. The two parts are strong on their own, but interspersed together they create a portrait of drug addiction and global conflict. I think it is an experiment that works.

"Inoculated City" has a bouncy beat to it to counter the darker lyrics about war. The inclusion of the 2000 Flushes commercial audio further undercuts the lyrics.

"Death Is a Star" closes the album on a softer musical note with jazzy piano melody. The lyrics though continue to focus on the effects of war on those who are forced to kill others as part of the conflicts.

Back in the 1982 I owned a copy of Combat Rock on vinyl. The record manages to deliver the band’s message of social questioning backed by intriguing musical compositions. Clearly the Clash was not yet ready to give up the fight that they so proudly championed in the late 70’s. As high school teenager back in 1982, it was all about the catchy rhythms; I rather preferred dancing first and thinking later.
Posted by Martin Maenza at 4:30 AM