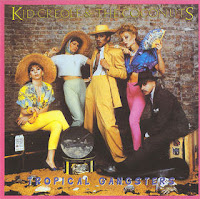 In the early 80’s, Kid Creole (August Darnell) and his musical group the Coconuts (which included Coati Mundi, Cheryl Poirier, Adriana Kaegi and Taryn Hagey) combined a number of musical styles from Latin and South America, the Caribbean and Trinidad with those of the big band era to create an entertaining sound.

This month marks the 30th anniversary release of their third studio album Tropical Gangsters (in the US it was released under the title Wiseguys). Though the album stalled at number 145 on the US Billboard Hot 200, it fared better on the US R&B charts (reaching number 43). Around the world, though, the record was a smash. It went to number 22 in Sweden, number 18 in Norway, number 9 in France, number 6 in the Netherlands and number 3 in the UK.


Side one starts off with “Annie, I’m Not Your Daddy”, the third single from the album. It went to number 18 on the US Dance charts, number 4 in Ireland and the Netherlands and number 2 in the UK. This song about questionable parenthood has an infectious dance groove to it; I remember jamming to this one whenever it would play on the local college radio station I listened to back in the day. I love the line “if I was in your blood you wouldn’t be so ugly”; it shows the humor that Darnell weaved into the lyrics of his songs.

“I’m a Wonderful Thing, Baby”, the first single, went to number 18 on the US Dance charts, number 44 on the US R&B charts, number 21 in the Netherlands and number 4 in the UK. This track, about the full-blown ego of a real ladies man, has a great bass groove to it with supportive backing horns.

“Imitation”, a song about those who follow in the footsteps of others versus those who blaze their own trails, really swings.

Side two opens with “Loving You Made a Fool Out of Me”, a track about the blush coming off the rose of romance.

The second single was “Stool Pigeon”; it reached number 25 in the US Dance charts, number 15 in Ireland, number 8 in New Zealand, and number 7 in the UK. This one tells the tale about a con-man who turns in evidence on others in exchange for self amnesty. The album version of the song is five minutes long and extends a number of the instrumental interludes over the single.

“The Love We Have” has a smooth samba sound.

“No Fish Today” closes out the record. With its island mood, it tells the tale of a fisherman who has nothing to sell at market because of government intervention.

As I mentioned before, Tropical Gangsters did not do well on the mainstream US charts but it was a dance club favorite. The local college radio stations also embraced Kid Creole’s grooves as part of the alternative dance scene. That is where I got my exposure to a number of tracks from this album, when I would listen to college radio while still in my Junior and Senior years of high school. A number of the tracks from this one were in the heavy rotation at the time.

If you are into dance grooves with a bit of spice, this 1982 gem is definitely an album to check out.
Posted by Martin Maenza at 4:30 AM