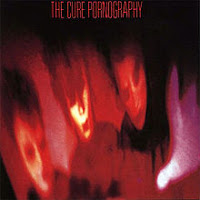 This week marks the thirtieth anniversary of the release of the Cure's fourth studio album; Pornography was released on May 3rd, 1982. Chart-wise, the album went to number 45 in Sweden, number 81 in France, number 9 in New Zealand and number 8 in the band's native UK. Many consider this one the most gothic records by the group due to dark lyrics and heavy musical sounds. The album was included on the list of the 1001 Albums You Must Hear Before You Die.


Side one opens with "One Hundred Years". Both Robert Smith and Laurence Tolhurst provide keyboards on this one which create rather ominous tones that are still very cool. The lyrics are full of imagery of death brought on by war. The repetition of phrases mirrors the futility of the situation.

Simon Gallop‘s bass on the start of "A Short Term Effect" sets the pace for this one. I really like the distortion of the vocals after the end of the lines on this one; it gives it a warped time effect. As with the first song, death seems to cast its shadow across this one.

"The Hanging Garden" picks up the tempo a bit with an urgent, ratta-tat drum from Tolhurst. Hearing this one I get the image of animals hung up to slaughter, some skinned already. Again, there is that pesky death poking his bony face about.

The imagery of falling angels surfaces in "Siamese Twins", as it did in the previous track. There is also the imagery of two people engaged in intercourse. I say that rather than “making love” as clearly the singer (Smith) is not overjoyed by the experience. The whole thing leaves him sad and bewildered, wondering if it is always like this.

Side two begins with "The Figurehead", another song about rejecting people in your life. In the last song it was about a girlfriend. This one, based upon the title, is someone with a bit more authority in the singer’s life. The lyrics talk too about secrets and lies, along with the phrase “I will never be clean again”. All of that points directly to sexual abuse of someone underage by an adult in his life. Very dark, but at least we’ve moved away from death. I am not quite convinced this is much of an improvement though.

"A Strange Day" has some odd imagery of a person falling apart like sand and being washed out with the tide. The whole thing is about the desire to escape the harsh realities of life.

Smith plays the cello on "Cold”, contrasting its deep rich tones with an industrial sterility of the keyboards and drums. I get the impression that this one is a bit of a dramatic response to a romantic break up; his heart has gone cold because of how his former love has ended things.

The title track closes the album. "Pornography" starts with some backward-masked dialogue that kind of brings to mind voices around you that you‘ve tuned out. The music then gets very jarring and anxious, going on for quite a bit of the six and a half minute length of the track. It is a disturbing look at those obsessed with pleasuring themselves to images of others. The specter of death returns once more with violent thoughts of murder. Okay, this one I probably would have skipped over.

In 1982, the Cure and Pornography would have very much been off my teenaged radar. I was as far removed from dark, introspective music as you could get; I was all about the synth-pop and the dance. As the 80's progressed, I was familiar with some of the band's more popular tracks from later albums.

As I listen to these earlier tracks by the band, I cannot help but think of the line from the Wedding Singer when Robbie Hart (played by Adam Sandler) is about to play a song he wrote for Julia Sullivan (played by Drew Barrrymore): "I was listening to a lot of the Cure when I wrote this". Basically, Hart's song bounces back and forth between all sweet and light to dark and angst-filled. Whenever the Cure comes on the radio, I always quote this movie line to my wife who was a fan of the Cure in the 80's. It gets a laugh usually.

All kidding aside, I actually found the album interesting to listen to. While it is not something I would put in heavy rotation in my music library, I can certainly appreciate the messages the Cure are trying to convey and their musical artistry in how they do that. This type of music I can only take in very small doses, a track here and a track there. Your mileage may vary.
Posted by Martin Maenza at 4:30 AM