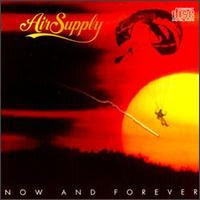 Happy sixty-first birthday today (May 5th) to Australian rock guitarist Rex Goh. He has toured and recorded with such bands as Air Supply, Savage Garden and QED.

This month also marks the 30th anniversary of the release of Air Supply’s 1982 album Now and Forever. The record went to number 27 in the band’s native Australia, number 46 in New Zealand and number 25 on the US Billboard Hot 200 chart. It was also the last time the band achieved Platinum sales in the US.


Side one begins with the title track. The ballad “Now and Forever” opens with a simple piano accompaniment before adding a richer orchestration. Graham Russell and Russell Hitchcock harmonize on the second verse and chorus.

“Even the Nights Are Better” was the first single from the album; this mid-tempo love song was all over the radio back in 1982. It went to number 44 in the UK, number 37 in New Zealand, number 35 in Australia, number 5 on the US Billboard Top 40 (with thirteen weeks total on the charts) and number 1 (for four weeks) on the US Adult Contemporary charts. Some might consider this sugary-sweet pop but I rather liked it. I was an impressionable teenager at the time, involved in my first dating experiences, and this song just fit in that whole wide-eyed, innocent romance viewpoint.

The second single “Young Love” went to number 38 on the US Billboard Top 4 and number 13 on the Adult Contemporary charts. The guys from Air Supply keep things safe with another love ballad, something they were good at delivering. The lyrics of this one capture that feeling of the beginning of a new relationship, when everything is so exciting and intense.

“Two Less Lonely People in the World”, the third and final single, went to number 46 in Australia, number 38 on the US Billboard Top 40 and number 13 on the Adult Contemporary charts. The lyrics tell of two people, both filled with despair and loneliness, who discover one another at a chance encounter.

Not breaking the pattern, the band closes the side with another love ballad. On “Taking the Chance”, the singer implores his partner to take a risk on love. The rapid-delivery of the title a number of times just before the three minute mark is a bit startling and unexpected; for me that kind of throws the song off a bit.

Side two starts with the gentle rolling of “Come What May”. The lyrics are all about acceptance of who a person is without trying to change anything about them. It is also about giving that person the space they need to deal with things in their own manner and time.

“One Step Closer” actually changes things up a bit with an up-tempo track. Though it still falls in the soft-rock category, the music does play up the rock aspects a bit more with the guitars, bass and drums.

The sweeping orchestration returns with “Don’t Be Afraid”. The vocal harmonies here remind me a bit of something out of the 60’s Simon and Garfunkel catalog. It too is a nice change of pace from the other slower songs from side one.

“She Never Heard Me Call” is the first of two tracks on the album that Goh co-wrote with Graham Russell. Goh’s rhythm guitar adds to the melancholy mood of this break-up song.

The album closes with the second Goh-Russell composition “What Kind of Girl”. Goh’s rhythm guitar here is a bit more hope-filled.

Now and Forever is one of those records for a quiet evenings, perfect music for playing softer in the background while you sip wine before a roaring fire with the one that you love. Air Supply provides a soundtrack for that quite well.
Posted by Martin Maenza at 4:30 AM