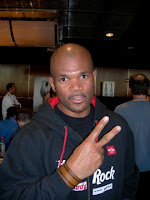 McDaniels grew up in New York City and attended Catholic school. After he enrolled in St. John's University. Inspired by the recordings of Grandmaster Flash and the Furious Five, he taught himself how to DJ. By the end of the decade, along with friends Joseph "Run" Simmons and DJ Jam-Master Jay, he was preforming rap publicly.

Here are the links to reviews the Run-D.M.C. albums I have done so far:

- for the 1987 A Very Special Christmas album that features a track from the band, click here
Posted by Martin Maenza at 4:30 AM