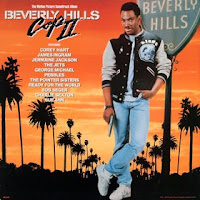 Welcome to another edition of Soundtrack Sunday. And today (May 6th) we wish a very special happy sixty-seventh birthday to American rock musician Bob Seger.

After the huge box office success of the first Beverly Hills Cop film in 1984 and its smash hit soundtrack album (click here for my review of that record), Paramount Pictures re-teamed Eddie Murphy with Judge Reinhold and John Ashton for the sequel. Naturally, a soundtrack album was also released; the Beverly Hills II album debuted at number 8 on the US Billboard Hot 200 charts and spent a total of twenty weeks there (slightly more than half the time its predecessor spent on the charts which was forty nine weeks).


Side one opens with Seger’s smash hit “Shake Down”, written by Harold Faltermeyer who also scored the film. The fast-paced, rocking single went to number 1 on the US Billboard Hot 100, number 1 (for four weeks) on the Mainstream Rock charts, and number 1 in Canada. The track was nominated for both an Oscar and a Golden Globe in the categories of Best Original Song; it lost both awards to “(I‘ve Had) The Time of My Life“ from Dirty Dancing. I’ve always enjoyed the energetic, driving beat to this one with the horns punctuating in the background; you cannot stand still when you hear it.

The Pointer Sisters, who appeared on the first film’s soundtrack, are back with “Be There”. This single release on reached number 78 in the UK and fell just shy of the Top 40 on the US Billboard charts (it stalled at number 42). This track has a thundering dance beat to it too along with a great horn section, the perfect compliment to the first track.

Texas rocker Charlie Sexton brings a grittier groove to the album with “In Deep”. I like his shredding guitar solos on this one.

“Hold On” by Corey Hart is next. The mood drops down slight to a mid-tempo but still danceable track.

George Michael’s controversial dance hit “I Want Your Sex” closes out the side. As a single, it went to number 3 in the UK and number 2 in the US (it was denied the number 1 spot by U2's "I Still Haven't Found What I'm Looking For"). It did very well despite a lot of censorship on the part of radio stations (they often would only play it in the later evening hours due to the song's subject matter). Indeed the song is sexually charged, but the message of monogamy is a strong one too ("sex is best when it's one on one"). The version on this soundtrack is half of the full nine minute work out which would appear later on his Faith album (click here for my review of that one). This was a hugely popular dance track back in the day, one guaranteed to get the floor packed and to throw everyone's libido into overdrive.

Side two begins with a “Better Way” by James Ingram. This single went to number 66 on the US Billboard R&B charts and number 40 on the Adult Contemporary charts. Ingram slides in that smooth soul to this groove.

“Love/Hate” makes its debut here, but Pebbles would release it as part of her self-titled debut album in 1988. The percussion on this one perfectly matches the dichotomy of emotions in the lyrics.

The Jets promise to “Cross My Broken Heart”. This single was a top ten smash, spending eleven weeks on the charts and reaching number 7 on the US Billboard Hot 100. The song also appeared on their third studio album Magic which was also released in 1987. Back in the day, I always grooved to the Jets both in the clubs and back at home when I was preparing for a night out. The Wolfgramm family knew how to deliver back in the 80’s and is still going strong today.

Ready For the World sings about “36 Lovers”. The Minneapolis synth-groove dance sound here is right in line with their earlier hits from their debut album from 1986.

Sue Ann Carwell is a noted R&B background singer who got a chance to step into the spotlight with “I Can’t Stand It” on this record. Her sound is right in line with the Pointer Sisters from side one.

Jermaine Jackson closes out the party with “All Revved Up”.

There is not denying that the soundtrack for Beverly Hills Cop II was taking direct aim at the dance floors of America in 1987. I think a lot of that credit goes to Faltermeyer who it sounds like had his hand in a number of these tunes.

While I did not own this record personally, listening to it takes me right back twenty five years. I am certain many of these tracks were showing up on the deejay sets during my clubbing days that summer of my final year of college. It was very hard to resist busting some moves around the living room instead of putting my thoughts down on the keyboard. At least my feet are tapping and my head is bobbing. If you’re looking for some mid-80’s tunes to groove to, this record is chock full of them.
Posted by Martin Maenza at 4:30 AM