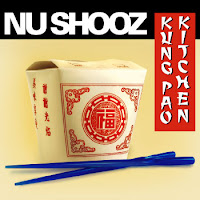 Do you ever have one of those days when you wanted to just party like it was 1992? Well, now here's your chance.

Last week, the Portland based husband-and-wife team of John Smith and Valerie Day, best known to the music world as Nu Shooz, released their sixth studio album Kung Pao Kitchen. The tracks were pulled from a nearly twenty year stay in the vault of previously unreleased material and re-mastered for the new millennium.


The album was made available initially in digital formats from all the usual places (Amazon, iTunes, and others - plus directly from them at their own website (click here)where they let you name your own price). Physical disks, for those of you who still go that route, will be forthcoming as well from CD Baby.

We start things off with “Anytime”, a mid-tempo jam with a steady dance beat and funky guitar groove. The backing harmonies remind me a bit of En Vogue during their early 90’s debut.

“I Would If I Could” opens with a bit of a New-Jack Swing sound thanks to the percussion and horns. The lyrics tell of a complicated relationship ripped right out of the classic soap operas.

“Didn’t Wanna Tell Ya” keeps the dance party going with this song about carefully guarded emotions.

“You Put A Spell On Me” is next. I like the mesmerizing effect on the vocals and music in parts of this one; they fit the whole theme of putting a spell on someone.

The tempo slows down a bit with “How Did We Fall In Love”, a track about reflecting upon the earliest days of a relationship. The hope is to recapture once more those feelings of newness that have faded over the years.

“I Just Wanna Talk About You” is a funky groove about being so infatuated with someone that they are all you can talk about.

“Different Kind of Love” slows things down once more. Valerie's sweet vocals tell of a life changing love, one that is deeper and richer than that which had been previously experienced.

“Stop Pretending” has a great big opening; it reminds me a bit of an opening to a classic urban police drama. The lyrics call for honesty in a relationship.

The album ends on a slower note with the dreamy "When I Think Of You". This one reflects upon a past relationship with fondness even though she knows there is no going back again.

John and Valerie are assisted by a number of amazing musicians on this release. Adding to his pool of piano/guitars/saxophones are Phil Baker (bass), Lewis Livermore (trumpet), Alec Milstein (bass), Pete Epstein (saxophone), Ron Regan (saxophone) and Maceo Parker (saxophone), the latter who played with the likes of James Brown, Parliament and Prince. Assisting her on vocals are Damone Brown, her sister Shannon Day, Tracey and Zack Harris, Linda Hornbuckle, Margaret Linn and Ross Seligman.

As a fan of the group from their short recording run in the mid-to-late-80’s, I was quick to download this one. And, I have to say, the sound you remember from back in the day is alive and well here for today's listeners. As many of the songs were written in the early 90’s by John and Valerie, this one is very much like the follow up to Told U So that never happened.
Posted by Martin Maenza at 4:30 AM