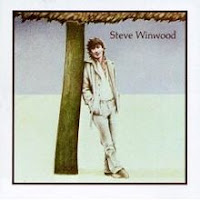 Welcome to another edition of Seventies Saturday. And a happy sixty-fourth birthday today (May 12th) the English born songwriter and musician Steve Winwood.

After a number of years as member of the Spencer Davis Group, Traffic and Blind Faith, Winwood decided to focus on a solo career. In June of 1977, he released his self-titled debut album Steve Winwood. Despite the presence of any major chart-busting singles, the record did go to number 12 on the UK charts and number 22 on the US Billboard Hot 200. A lot of that was likely fueled on his past work with Traffic and the fact that Jim Capaldi, drummer of that band, co-wrote two thirds of the album with Winwood and also played percussion on a number of the tracks.


Side one opens with “Hold On”, the first single from the album. This song about getting assistance from another in times of trouble has a soft, funky vibe to it. Winwood’s synthesized organ goes well with the bass riffs by Willie Weeks.

“Time Is Running Out” was the second single. The lyrics are observational of the times, commenting on the business, women, the youth, advertising and war. In the end, he wants to get away from it all to regroup and recharge. The rhythm of this one reminds me of the locomotion of a train as it moves on down the line. I like the congas here, played by Rebop Kwaku Baah, an African percussionist who also worked with Traffic.

The longest track of the album is the eight-and-a-half minute “Midland Maniac”. This ballad starts with a beautiful piano part. The lyrics tell of someone trapped between constant performing and wanting to get away with the one he loves. A more abbreviated version of the song appeared on the B-side of the first single.

Side two starts off with “Vacant Chair”, a song that reflects upon the loss of a dear, close friend. It tells of having to move forward and not let that person’s death consume us. The mid-tempo song is light but not melancholy; it seems to reflect those good memories of the one who has passed on.

The B-side to the second single was “Luck’s In”. This one is about a new relationship where the man feels he has found the right woman with whom to spend his life. His luck has changed for the good. I like the darting, jazzy opening to this one and the extended jam during the final minutes.

The slow-tempo, closing ballad “Let Me Make Something in Your Life” is about a relationship in conflict. It emphasizes actions over words, favoring a loving embrace over just trying to talk things out. The ultimate goal is to get back to that place of good and harmony.

Steve Winwood is a very laid-back, relaxed album. This is one you kind of lean back and just let everything wash over you. With only six songs total, there is plenty of room for Winwood and his band to let the music breathe. The compositions are top notch and tightly performed.
Posted by Martin Maenza at 4:30 AM