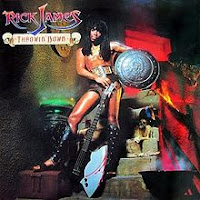 The album peaked at number 13 on the US Billboard Hot 200 and number 2 on the R&B charts, generating a Gold sales certification. In the UK, the album only got as high as number 93 on the charts.


Side one begins with “Dance Wit’ Me”, the album’s second single. The track went to number 64 on the US Billboard Hot 100, number 7 on the Dance charts and number 3 on the R&B charts. The album cut is over seven minutes of what James does best, laying down a funky groove to boggie to; it is a perfect 80’s party tune. The vibraphone solo on this one was played by Roy Ayers, and Daniel LeMelle provides the smooth saxophone solo.

“Money Talks” is a light commentary about the economic times in the US in the early 80’s, all backed by a driving dance beat. As usual, it sees things through James’ lens of the street life in the inner cities. While I find no fault with the music, I think it could have had a bit more bite to it lyrically.

Things slow down a bit with the ballad “Teardrops”. This one has all the earmarks of a classic James R&B slow-jam, including touches of his falsetto and rap, along with a backing string orchestration. Once more, LeMelle provides the saxophone solo.

The party gets back in gear with “Throwdown”. James is on his game as he tries to persuade a sweet young thing to come join his partying life-style.

A collaboration with fellow Motown artists the Temptations opens side two. “Standing on the Top” was the first single from the album; it went to number 66 on the US Billboard Hot 100 and number 6 on the R&B charts. The lyrics comment about being on the top of one's game and how it is so easy to fall from that spot if you're not careful. I always enjoy these classic musical team-ups across the label; James really brings out some great stuff from everyone with whom he works.

“Hard to Get”, the third single, had a harder time on the charts. It only scored a 15 on the US R&B charts. I am surprised by this since the song has a very strong resemblance to his big hit “Super Freak” from a year prior; the music is so similar that the two could very easily be mixed together by deejays without much effort.

“Happy” is the second ballad on the record. I like how it showcases James at the piano, allowing him to show-off his smooth, powerful vocals. He really did have a wonderful voice back in the day. And while it is not credited, it certainly sounds like he got the incomparable Teena Marie to do backing vocals on this one. The two are always great together.

“69 Times”, released as the last single under the title “You Blew My Mind (69 Times)”, only topped out at number 62 on the US R&B charts. No surprise, this dance groove is built upon a double-entendre. Grace Slick provides guest backing vocals on this one.

“My Love” closes out the record on a slower, seductive note. The song is a bit short, just under three minutes, and feels more like an overture rather than a full track.

When Throwin’ Down was released in early 1982, it certainly would have fallen into my interest in dance music. However, unlike Rick James’ previous album, this one did not have singles that crossed over which is likely why it fell short of my radar. Despite that, this one has some classic funk grooves and smooth R&B slow jams to make it a good album.
Posted by Martin Maenza at 4:30 AM