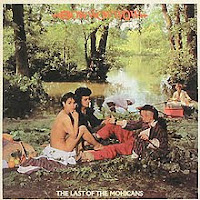 This month marks the 30th anniversary release of The Last of the Mohicans, a four song EP by the English new wave band Bow Wow Wow. The band (consisting of Matthew Ashman on guitar, Leigh Gorman on bass, and David Barbarossa on drums and singer Annabella Lwin) had released a couple studio albums prior to this record. They also worked with mastermind producer Malcolm McLaren.

The May 1982 release went to number 67 on the US Billboard Hot 200 and features the group’s biggest hit. The cover features the under-aged Lwin completely naked (it was the same photo used for the band’s first full-length album from 1981).


Side one opens with “I Want Candy”, a cover of the 1965 top twenty hit by the Strangeloves. Bow Wow Wow’s version was the song that introduced many in America to the group. Though it only got to number 62 on the US Billboard Hot 100, the song quickly became a new-wave classic thanks to a video that was featured in heavy rotation on MTV. In the band’s native UK, it went to number 9 on the charts. Since, the song has been featured on a number of film soundtracks and also appeared on a couple VH1 countdown specials (number 86 on the 100 Greatest Songs of the 80’s, and number 8 on the 100 Greatest One Hit Wonders of the 80’s).

This is one of those 80’s songs I love. The opening drumbeats by Barbarossa which are then joined by the strumming guitar riff by Ashman instantly pull me in. Lwin puts a reverse-spin on the original lyrics, turning it into a song about a girl lusting after a guy.

“Cowboy”, a steamy song about sexual desire, has a strong bass riff by Gorman. Just as the last track ends with a delayed drumbeat, this one ends with a prolonged guitar strum.

Side two starts off with “Louis Quatorze”, a song about a confident young lover. What might be shocking is Lwin sings about being only fourteen when she first made love with this guy.

“The Mile High Club” was a song written by Adam Ant and Marco Pirroni, former bandmates of Ashman, Gorman and Barbarossa. It first appeared on the Adam and the Ants album Prince Charming from 1981. The song is a celebration of having sex in a jet plane.

The Last of the Mohicans is only about twelve and a half minutes long total, but Bow Wow Wow makes the most of that time. This extended-play record gives a nice sampler to the band’s musical style.
Posted by Martin Maenza at 4:30 AM