Captain and Tennille - Song of Joy 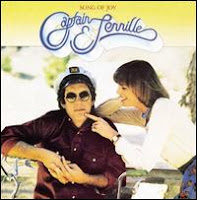 Tomorrow (May 8th) marks the seventy-second birthday of Toni Tennille, the American pianist and singer with a contralto vocal range. She and her long-time musical partner Daryl “the Captain” Dragon have been married since 1975 and live in Prescott, Arizona.

Following their solid debut album Love Will Keep Us Together in 1975 (click here for that review), the musical duo starred in their own hour-long musical variety show on the ABC television network from September 1976 to March 1977. This coincided with their Platinum selling second album Song of Joy climbing the charts in 1976 (it went to number 9 on the US Billboard Hot 200 charts).


Side one opens with “Song of Joy”, written by Billy Preston. This slow piano ballad lets Tennille’s vocals ring out clear and strong.

Next up is a cover of Neil Sedaka’s “Lonely Night (Angel Face)” from his 1975 album The Hungry Years. Having so much success with a Sedaka track on their first album, it made perfect sense to do another for the follow up. As the first single from the album, it hit number 3 on the US Billboard Hot 100 and number 1 on the Adult Contemporary charts. The sounds of wildlife at the start is a nice touch, and the rest of the music has a bit of a calypso swing to it that adds to it well. Tennille’s sisters Jane, Louisa and Melissa provide backing vocal harmonies on this one.

“Mind Your Love” was written by American country singer Jerry Reed. The song has a toe-tapping rhythm to it that harkens back to the early days of rock. The Captain really goes to town on the keyboards here with help of a saxophone section.

Tennille penned the next track “Smile For Me One More Time”, a track with a southern Gospel sound to it. No surprise really since Tennille was born and raised in Montgomery, Alabama.

Next is a cover of the Miracles 1960 smash hit “Shop Around”, written by Smokey Robinson and Berry Gordy Jr. This new version went to number 4 on the US Billboard Hot 100 and number 1 on the Adult Contemporary charts. I’ve always liked what the duo did on this one; the music bounces along playfully and the vocals have a sassy attitude to them.

The Captain penned “Going Bananas”, a fun, nonsense-filled track that features his keyboard skills. I was always fascinated to watch him play when watching their variety show; he made it all look so effortless.

Side two opens with a composition by the couple called “Butterscotch Castle”. The song reminds me of childhood innocence and sweetness, a time of simpler things and comfort. It reminds me of the type of song that the Carpenters might have written.

“Muskrat Love” was written by Willis Alan Ramsey for his 1972 album, under that title of “Muskrat Candlelight“. The band America recorded it for their 1973 album Hat Trick. But it was this version by Captain and Tennille that gained the most notoriety. It hit number 4 on the US Billboard Hot 100 and number 1 on the Adult Contemporary charts. This is one of those songs I heard so much on the radio and from my turntable back in the day that I still remember every single word to it. Yes, some might consider it a corny song, but I am known for like corny things like this.

Bruce Johnston of the Beach Boys penned “Thank You, Baby”. The Captain spent a few years playing with the group and Tennille also sang back-up for them, so it is no surprise that they enjoyed recording Johnston’s songs. Two of the songs on their first album were also written by him.

“The Wedding Song (There Is Love)” was written in 1969 by Paul Stookey of the group Peter, Paul and Mary, and recorded on his 1971 album. Petula Clark released it as a single in 1972. This track was scheduled to be released as the third single (A&M even had assigned it a release number) but was pulled at the last minute. I can remember how popular this particular song was in the 70’s at weddings I attended. It is such a beautiful celebration of the joining of two people.

The album closes with another composition by the couple; this one was entitled “1954 Boogie Blues”. The song has a slow, Memphis blues swagger to it with Tennille’s smooth, show-stopping singing. Jim Horn provides the saxophone solo on this one.

Back in 1976, I was a huge fan of the Captain and Tennille. I watched their variety show each Monday night and owned a copy of Song of Joy on vinyl, which I got from a mail-order record club along with their debut record. Both those vinyls are long since gone, but I did pick up the boxed CD set of the six albums on the A&M label a number of years back. This is the kind of soft-pop music that I was into when I was eleven years old as it reflected the Top 40 radio that I listened to at the time. I think Song of Joy stands up well to the test of time; it is not dated in the least.
Posted by Martin Maenza at 4:30 AM

Wholehertedly agree (I was a huge fan, too). Their sophomore effort showed, I thought, more maturity and confidence in their perforomances, and is still my favorite of their albums. "Thank You, Baby" was (IMHO) the only song on the album I could not recommend - a sweet tribute tune to a loved one, but then the brakes get slammed on the whole thing at the end. ("But we both know that it just won't work...") The listener is left with feelings of "HUH? Wha-?"
Kind of like many fans' reactions to reading about the couple's pending divorce...

James, thank you for the comments. They are always appreciated.

I had a similar reaction to their pending divorce. I hope there is much more to this than meets the eye. I cannot fathom why they would divorce at this point in life.