Franke and the Knockouts - Below the Belt 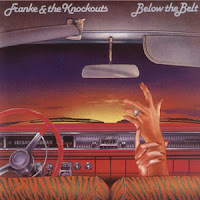 Today (May 23rd) marks the 30th anniversary of Below the Belt, the second album by Franke and the Knockouts.

The New Jersey band was fronted by singer/songwriter Franke Previte, whose most known work may be the two songs he co-wrote for the film Dirty Dancing - “(I've Had) The Time of My Life" and "Hungry Eyes". The Knockouts were made up of Leigh Foxx (bass), Billy Elworthy (guitars), Claude LeHenaff (drums), and Blake Levinsohn (keyboards).


"Never Had It Better" kicks off side one. I like the combination of guitars and keyboards on the opening of this mid-tempo rocker. The song is a message to his lover, wondering why she’s working so hard to ruin a good thing.

"Without You (Not Another Lonely Night)", the first single from the album, went to number 24 on the US Billboard Hot 100. This love ballad shows a softer, gentler side of the band. I remember this one getting quite a bit of Top 40 radio airplay back in the Spring of 1982; it is definitely one of those often forgotten gems.

"Just What I Want" tells of a complete commitment to a relationship. Elworthy has wonderful guitar solos on this one.

Things slow down again with "Any Way That You Want Me", an emotion-filled ballad. The keyboards have a bit of a 60’s soul sound to them.

"Morning Sun (Dream On)" is another one of those songs that sound oh so familiar when you hear it. It is a well crafted soft-rock song with a catchy chorus.

Side two starts with "Shakedown". The opening is very moody and ominous; I like how the music goes through a slow build until it explodes at the chorus. This one reminds me a bit of Foreigner, especially with Franke’s vocals.

"Keep On Fighting" has a positive message backed by a great beat and thundering guitars.

"Have No Fear" bounces along to LeHenaff’s drums. The lyrics once again tell of a commitment to a loving relationship.

The album closes with "Gina", an ode to a sexy, sensual woman.

Though they were only together from 1980 to 1986 and put out three total albums, Franke and the Knockouts made some solid music during that period. The tracks here on Below the Belt are a good example of that. And because the music was not over-exposed from constant airplay, it still sounds fresh and original thirty years later. I am definitely a fan of the album.
Posted by Martin Maenza at 4:30 AM