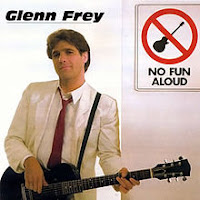 American singer, songwriter and guitarist Glenn Frey spent the 70’s as part of the California super-group the Eagles. When the group broke up, Frey went on to a solo career.

Today (May 28th) marks the 30th anniversary of his solo debut album No Fun Aloud. The Gold certified album went to number 32 on the US Billboard Hot 200; it also went to number 39 on the Swedish charts.


The first side opens with “I Found Somebody”. As the first single, it went to number 31 on the US Billboard Hot 100, number 57 on the Mainstream Rock charts, and number 27 on the Adult Contemporary charts. Opening with a sweet saxophone riff, this one is a celebration of a life-changing new love.

The second track “The One You Love” was also the second single. It went to number 15 on the Hot 100, number 2 on the Adult Contemporary charts, and number 12 on the Canadian charts. This one too has a great saxophone opening; it is a beautiful slow-dance tune that was quite popular for a number of years after its release. I can remember dancing to this one at the end of the night in bars after I turned eighteen in 1983 and at parties in college later that year. The lyrics, the saxophone - the perfect combination that very often ended in a dance floor kiss.

“Partytown” made it all the way to number 5 on the Mainstream Rock charts. This one has a great drum beat and plenty of attitude. The track was often played at the end of the work week on Fridays as way to welcome a few days of unwinding and having fun.

“I Volunteer” is one of those classic Frey ballads that harkens back to his days with the Eagles.

“I’ve Been Born Again” is a cover of a tune first recorded by Johnny Taylor. Frey gives it an old-time rock and roll feel, with a grinding guitar groove and gospel-like backing vocals.

Side two starts with “Sea Cruise”, a rousing cover of the top ten 1958 song by Huey “Piano” Smith. The band does a great job with this toe-tapping tune, giving it the right amount of swing.

“That Girl”, the B-side to the third single, was co-written by Frey and Bob Seger. It has a wonderfully subdued approach to the music and the vocals, demanding that you stop everything and really listen to it. This was another great slow-dance track too.

“All Those Lies”, first released as the B-side to the second single, was release then as the third single. It went to number 41 on the Billboard Hot 100 and number 28 on the Adult Contemporary charts. It is the one track on the album that Frey wrote completely by himself.

“She Can’t Let Go” was the B-side to the first single. This one has a rhythm that reminds of a tropical beach getaway with its gentle percussion and strumming guitar.

“Don’t Give Up” reached number 25 on the US Mainstream Rock charts. This up-tempo track has bit of a dance beat to it, dipping its toe a bit into a more new-wave sound with the synthesizer riffs.

No Fun Aloud is another one of those albums that I have long since forgotten about as the decades passed. In listening to it for this review, I remember hearing a number of these songs on the radio, top 40 and album oriented rock, while I was still in high school. They instantly took me back to 1982, reminding me of how well Glenn Frey transitioned to a solo act with this album.

I want to seek a number of these songs out again for my music library. Unfortunately, it looks like I’ll have to hunt down a CD for a reasonable price as none of Frey’s albums are currently for sale in the usual digital outlets I frequent (Amazon, iTunes, eMusic).
Posted by Martin Maenza at 4:30 AM