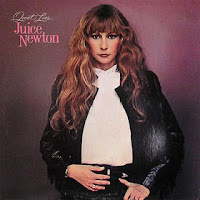 Likes its predecessor from the year before, this 1982 album had crossover appeal. It went to number 7 on the US Billboard Country charts and number 20 on the Billboard Hot 200. It also reached number 36 on the Canadian charts. The album also generated a number of hit singles that appeared on both the country and pop charts.

The next track is a cover of a song originally recorded by Brenda Lee in 1961. Newton began singing the tune on her 1981 tour and decided to record it for this album. "Break It to Me Gently", the second single, went to number 2 on the US country charts, number 11 on the Billboard Top 40, and number 1 on the Adult Contemporary charts. In Canada, it went to number 2 on the country charts and number 1 on the Adult Contemporary charts. This beautiful ballad, with its rich orchestration and a country saunter and Newton’s sultry growl, won her the Grammy Award for Best Country Vocal Performance Female.

"Love Sail Away" has a classic rock-blues guitar groove that gets your feet moving. It was the B-side to the third single.

Things slow down again with "I'm Dancing as Fast as I Can". I like the crisp guitar accompaniment on the first verse as it allows Newton’s voice to take the lead on this emotional song.

Side two starts with "I'm Gonna Be Strong", which was originally recorded by Frankie Laine in 1963 and then by Gene Pitney in 1964. Cyndi Lauper has also covered this song, both in her first band Blue Angel and later as a solo artist. Newton’s version takes a big and bold approach to the dramatic song about finding one’s inner-strength to carry on.

"Trail of Tears" kicks things back to the dance floor with a saxophone supported country-boogie. The lyrics here are about being a strong and not letting sadness and heartbreak take over.

"Adios Mi Corazon" has that classic country sound thanks to the steel guitar. It served as the B-side to the second single.

"Falling in Love" continues that classic country vein with a cautionary tale about the pitfalls of infatuation.

The album closes with "Ever True", a gentle ballad about dedication and devotion. It was the B-side to the second single.

Growing up in the 70’s, one of my country favorites was Linda Ronstadt. Juice Newton reminds me quite a bit of her. Both women were active in the 70’s and revitalized their audiences as the 80’s opened. Both women are also adept at mixing things up a bit, going from country to soft-rock and back again with considerable ease. Quiet Lies holds up very well for a record three decades old; I guess good country music never goes out of style.
Posted by Martin Maenza at 4:30 AM