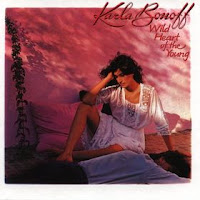 This month marks the 30th anniversary of the third studio album by American singer-songwriter Karla Bonoff. Wild Heart of the Young reached number 49 on the US Billboard Hot 200 and gave Bonoff her highest ranking hit single.

Bonoff started her career as a background singer for Linda Ronstadt and Wendy Waldman before releasing her first album. Over the years, her songs have been recorded by the likes of Ronstadt, Bonnie Raitt, Lynn Anderson and Wynonna Judd.


Side one kicks off with “Personally”, the hit single that went to number 19 on the US Billboard Hot 100 and number 3 on the US Adult Contemporary charts. It was written by Paul Kelly and first recorded by R&B singer Jackie Moore in the 70‘s. I will tell you right off that I simply love this song, a four-star track in my digital music library. Bonoff conveys the emotions of longing for long-distance lover perfectly. I will sing right along with her on it whenever it comes up.

As the second single from the album, “Please Be the One” only reached number 63 on the Billboard Hot 100 and number 23 on the Adult Contemporary charts. It opens with a slow, somber tempo that sets the tone for the rest of the track. The lyrics are full of wishful desire.

“I Don’t Want To Miss You” picks up the tempo of so slightly with a song about putting up barriers to avoid any further heart break. Bonoff’s rich vocals shine on this one.

On the slow ballad “Even If” tells of a woman who has so completely given up on love that she feels no one can ever help her find it again.

“Just Walk Away” is a lovely slow piano ballad. It has a sad saxophone solo which I always enjoy.

Side two begins with “Gonna Be Mine”. This one has a confident saunter to it musically as Bonoff sings confidently about winning over the affections of a guy she has her eye on.

The title track “Wild Heart of the Young” is next. The song reflects upon days past, when she failed to realize what she had in that first love.

“It Just Takes One (To Say Goodbye)” is about the man who said he was ready for a commitment only to decide after all that he is not. Bonoff takes the position of the woman who knows he is going to regret the actions someday.

“Dream”, the B-side to the first single, closes out the album. The song has a sleepy, country sound to it that allows Bonoff to hold long notes often on the verses.

Accept for the first track, Wild Heart of the Young is a much laid back, relaxed album. Karla Bonoff knows how to craft beautiful, heart-felt songs and delivers them quite effectively. I found each of them to be pleasant to listen to. However, I would have liked to see her change things up just a little bit and perhaps add a couple more up-tempo tracks into the mix to break things up a little.
Posted by Martin Maenza at 4:30 AM

to me, Karla is one of the best singer/songwriters ever. She puts so much feeling into her music. She has always been one of all time favorite artist, and I truly love the CD and song "Wild Heart of the Young." To me, this is Karla at her very best. Thank you for your blog...