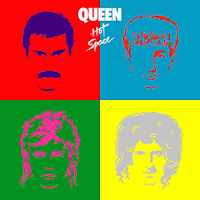 Today (May 21st) marks the 30th anniversary of the tenth studio album by the British rock band Queen. Hot Space fused a number of different elements like pop, disco, R&B and dance into the musical mix, which was a bit of a turn-off to many of their fans who preferred their earlier, traditional rock sound.

The album went to number 22 on the US Billboard Hot 200, number 15 in Australia, number 7 in France, number 6 in Japan, number 5 in Germany, number 4 in their native UK and in Sweden, number 3 in Norway, and number 1 in Austria and the Netherlands. Six of the tracks were released as singles with varying degrees of success.


Side one starts with “Staying Power”; this fourth single was released on in the US and Japan yet it failed to make any major chart impact. The funky dance track features a horn section, arranged by Arif Mardin who worked with the likes of the Bee Gees and Aretha Franklin.

“Dancer” mixes rock and disco with the bass riff played on a synthesizer by Brian May. The lyrics tell of meeting someone at a party and feeling an instant attraction.

“Back Chat”, also released as a single, charted in the UK (at number 40), Germany (at number 69) and Ireland (at number 19). John Deacon wrote this one and was influenced by the soul and R&B music he grew up on. The title is an English idiom for a teasing argument between people.

“Body Language”, the second single, went to number 11 on the US Billboard Hot 100, number 25 in the UK, number 13 in Ireland, and number 4 in the Netherlands. The lyrics are all about physical attraction and sex with no strings attached. I owned this track on a 45 back in 1982; I loved the dance rhythms to the song. I can remember it playing quite a bit on the Top 40 radio that I listened to.

“Action This Day”, written by Roger Taylor, is more of a new-wave sounding track with thundering electronic drum machine and synthesized saxophone solos. The title comes from a catchphrase used by Winston Churchill on urgent correspondence.

Side two begins with “Put Out the Fire”, a song with a strong message against firearms. It is a more gritty rock number with May’s heavy, grinding guitar.

“Life Is Real (Song for Lennon)” is Freddie Mercury’s tribute to the late John Lennon who was murdered in 1980. I like the simple piano arrangement at the start which helps to set the melancholy tone of the piece. The whole track has a Beatlesque flavor to it.

The single for “Calling All Girls” went to number 60 in the US and number 33 in Canada. The lyrics is a wake-up call to the world to spread a message of love and peace. I like the scratchy record effect of the line “this message is…“ in the later part of the track. The music video was based on George Lucas’ THX 1138, a 1971 sci-fi film.

The third single “Las Palabras de Amor (The Words of Love)” went to number 18 in the Netherlands, number 17 in the UK, number 13 in Switzerland and number 10 in Ireland. The synthesizers give it a other-world, cosmic sound.

“Cool Cat” goes back to the funky rhythms with a throwback to 70’s soul. Mercury’s falsetto further adds to that sound.

“Under Pressure”, a collaboration with David Bowie, closes out the album on a high note. It was the first single from the album and went to number 10 in Austria and Switzerland, number 6 in Australia and New Zealand, number 2 in Ireland and number 1 in the UK and the Netherlands. In the US, it only reached number 29 on the Billboard Hot 100. The song came out of an impromptu session in the studio in Montreux; Mercury and Bowie recorded their vocals separately. The back rhythm on this one is so simple yet so enticing; it pulls you in the moment the track starts. No wonder Vanilla Ice sampled it, without permission, for “Ice Ice Baby”. I really like too how it builds in intensity as the track goes on, as the pressure builds to a breaking point. It then ends with that rhythm again and a nice fade out. Definitely the best track on the record, in my opinion.

As someone who enjoyed the disco music of the 70’s and dance music of the 80’s, Hot Space is right there in my wheel-house. I like the driving beats and the funky grooves. I see it as a definite departure from what came before with the band, but I can also see it as an attempt by Queen to try something new and different. After all, no artist wants to make the same albums over and over again. I applaud them for taking a chance with the record.
Posted by Martin Maenza at 4:30 AM