Terri Gibbs - Some Days It Rains All Night Long 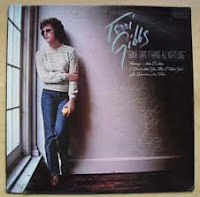 Blind since birth, country music artist Terri Gibbs learned to play piano at the age of three. In 1980 she was signed to MCA Records at age twenty six. After her debut album Somebody’s Knockin’ in 1981, which included a smash hit crossover single of the same name, she won the Academy of Country Music’s Top Female Vocalist award that year.

This month marks the 30th anniversary of her third studio album Some Days It Rains All Night Long. The record went to number 33 on the US Billboard Country Albums chart. It also produced a trio of singles.

“You Don’t Have to Say You Love Me” was first recorded by Dusty Springfield in 1966. Marie Osmond did a cover in 1978 for the film Goin’ Coconuts. Gibbs takes the song for a spin on this album

The title track “Some Days It Rains All Night Long” is a gentle, melancholy number. The softer, simple arrangement lets Gibbs’ voice ring out with emotion. This second single got as high as number 45 on the US Billboard Country charts. Charley Pride recorded a version of the song for his 1984 album Power of Love and Anne Murray recorded a version of the song on her 1991 album Yes I Do.

“Baby I’m Gone”, a song about cutting all ties, features an upbeat tempo with a rollicking piano riff. As the third single, it peaked at number 33 on the US Country charts and number 29 on the Canadian Country charts.

Side two starts with “I’ve Got a Song In My Heart”.

“Ashes to Ashes” was the first single from the album. It reached number 19 on both the US Billboard Country and Canadian Country charts. The lyrics address betrayal as her man takes off with one of her best friends.

“I Wanna Love You Tonight” is next.

“Go Somewhere and Hide” is a moving song about the death of a loved one and the lack of strength to face the world alone.

Crystal Gayle first recorded “All I Wanna Do In Life” on her 1977 album We Must Believe in Magic. Gibbs closes this album with her take on the country tune.

Like most of Terri Gibbs’ earlier catalog, finding all of the tracks to Some Days It Rains All Night Long is a daunting quest. Without original vinyl or cassette, the best you can hope for is the tracks that are represented on her greatest hits CD.

For a music archeologist like me, that is disappointing. One would hope that labels would, if they still have the rights, at least take the time to put old releases like this one and others out in digital format. I am a firm believer that the music will find its audience, both old and new listeners, if it is available.
Posted by Martin Maenza at 4:30 AM