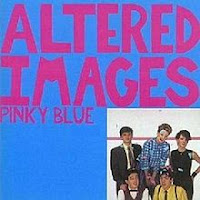 This week marks the 30th anniversary of the release of their second studio album Pinky Blue. The record went to number 12 on the UK charts and generated a number of singles.


The title track "Pinky Blue" opens side one with some out of this world sound effects before evolving into a carefree melody. As the last single from the album, it peaked at number 35 in the UK.

"See Those Eyes", the second single, went to number 11 on the UK charts. In the US, this one was a college radio favorite. The lyrics tell a deceptive woman who is stringing along a clueless young man.

"Forgotten" continues the bouncy beats and the band’s style of repeating lines back to back in the lyrics. That later bit kind of makes this one a bit forgettable in my book.

"Little Brown Head" is about an introspective brunette who keeps to herself and those who wonder what she’s thinking about.

"See You Later" changes things up in the rhythm department, going for a more exotic flavor.

The side closes with a cover of Neil Diamond's 1972 hit "Song Sung Blue". I like how they interpret the music on this classic, and Gorgan’s innocent, child-like vocal style is certainly different than Diamond’s. The guys provide the backing vocals.

Side two starts with the samba-like rhythms of "Funny Funny Me". The lyrics are about realizing that sometimes you can be wrong about where a relationship is going.

One of Gorgan‘s vocal tricks is extending the syllables on words. She does that a good bit on "Think That It Might".

Next up is a dance mix of the song "I Could Be Happy", a single which went to number 7 on the UK charts in late 1981. The lyrics tell of getting out a relationship and finding happiness elsewhere. I remember this one being played quite a bit on the local college radio station when I was in high school.

"Jump Jump" opens with a strong bass riff followed by what sounds like an accordion. Once more, we have a song about forgetting a boy and moving on.

The album closes with the slower tempo of "Goodnight and I Wish". It is the soft, sweet desires of a young woman who wants to slip away into dreams with her love.

With Pinky Blue, Altered Images did indeed alter their musical image from their first album. Before, they were more post-punk with hints of Goth thrown in. Here, they went for a more commercial pop crossover kind of record. The music is much lighter and the lyrics more grounded and relatable (focusing predominantly on relationships). Grogan's vocals remind me a bit of Dale Bozzio of Missing Persons, another female fronted band that was getting chart airplay in 1982.
Posted by Martin Maenza at 4:30 AM