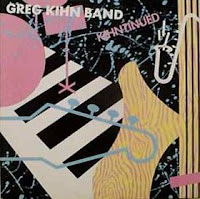 This month marks the 30th anniversary of the release of the seventh studio album by the Greg Kihn Band.


“Happy Man” starts off side one. As the second single from the album, it went to number 62 on the US Billboard Hot 100 and number 30 on the US Mainstream Rock charts. The mid-tempo rocker is about a guy hoping to find bliss with the right woman in his life.

“Every Love Song” has a sultry, funk groove to it. Kihn sings this one like a guy totally caught up in the seductive spell of a sexy siren. The saxophone solo adds to the mood nicely.

“Everyday / Saturday” and “Dedication” are the next two tracks on this side.

“Tell Me Lies” features a bit of a reggae beat to it. The lyrics tell of a guy who would rather have his girlfriend lie to him rather than face the fact that they are having problems.

Side two opens with “Testify”, the first single from the album. This bouncy track went to number 5 on the US Mainstream Rock chart.

“Sound System” is next on this side.

“Seeing Is Believing”, a song about telling a former lover to hit the road, features just the right amount of angst in the vocals.

Next up is a cover of “Higher and Higher”, the R&B classic first recorded by Jackie Wilson in 1967 and then Rita Coolidge in 1977. The band’s drummer Larry Lynch did the lead vocals on this version.

The album closes with “Family”, a song that proclaims the importance of families sticking together.

Kihntinued definitely picked up on the new-wave trend crossing over into the rock and pop genres in the early 80’s. You can hear the influence in a number of the tracks here. The downside is that unless you have a copy of this album on vinyl and cassette from back in the day, it will be very hard to hear all of the songs (I had to work to track them down online to listen for this review). It would appear the record label never released this album on CD and it is not available at this time in digital format either. That is a shame indeed.
Posted by Martin Maenza at 4:30 AM

Greg just finished purchasing his entire music catalog and in chronologic order, he is going to re-master all of of them digiatlly and re-release them all to cd!

That is good news about the re-mastering for re-release. Thanks for sharing the info.