Modern English - After The Snow 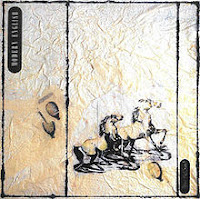 Today (May 3rd) marks the thirtieth anniversary release of the second studio album from Modern English. 1982's After The Snow went to number 15 in the UK and number 78 on the US Billboard Hot 200. The English band was made up of Robbie Grey (vocals), Gary McDowell (guitars), Stephen Walker (keyboards), Michael Conroy (bass, violin) and Richard Brown (drums, percussion).


Side one starts with "Someone's Calling", which as the third single reached number 43 in the UK. The lyrics tell of the aftermath of some kind of conflict; the mid-tempo music does not convey any urgency though.

"Life in the Gladhouse", the first single from the album, went to number 26 in the UK. The opening is cool with the drums and the keyboards, making for a danceable rhythm. After many listens to this one, I am still not sure what exactly the Gladhouse actually is.

"Face of Wood" opens with a very somber tone before picking up the tempo significantly. Again, we have another danceable song with some very mysterious yet quite poetic lyrics. “I am oak” - not sure what that’s all about.

"Dawn Chorus" is a mid-tempo ballad that paints a vivid picture of an early summer morning in war-torn world.

Side two begins with the 80's classic "I Melt with You". This second single went to number 18 in the UK and number 78 on the US Billboard Hot 100. The song, whose lyrics tell of a couple making love as nuclear bombs fall all around them, gained much popularity in 1983 due to heavy video airplay on MTV and appearing during the closing credits of the movie Valley Girl (click here for my review of that soundtrack album). Years later, the song was ranked number 39 on VH1's 100 Greatest Songs of the 80's and number 7 on its 100 Greatest One Hit Wonders of the 80's lists. This is one of those songs that I just love to sing along to whenever it comes on.

The title track is next. "After the Snow" seems to be carrying on the post-apocalyptic theme of the album, with a bit of a feeling of hope for better days to come.

"Carry Me Down" is probably my next favorite on the album. I like the light, airy sound of the music on the chorus; the whole composition is quite beautiful. Grey’s vocals carry the mood quite well also.

The album closes with "Tables Turning", a more up-tempo new-wave track. Conroy on the violin is a nice touch here that works quite well with the rest of the composition.

In 1982, I was a huge fan of "I Melt with You" from radio airplay and later MTV; I have it rated a five-star track in my iTunes library. In the early 90's after I got married and got my first CD player for the house stereo, my wife picked up this album on CD. She had After the Snow previously on a cassette and had seen Modern English play live in Raleigh, NC, in the 80's. It was through her that I came to know the rest of the album and their early 80's music catalog.

This album is definitely artistic and heavy on the gloom and doom themes, but it isn’t nearly as dark and gothic as the Cure album that was released on the same day (see yesterday’s review). At least with Modern English there is a sense of hope and of moving forward, not wallowing in the pits of despair.
Posted by Martin Maenza at 4:30 AM