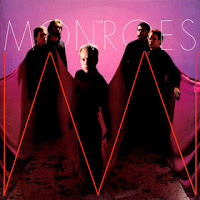 They released their self-titled debut five song EP The Monroes in April 1982, thirty years ago this month. They supported the record by touring with artists like Greg Kihn, Rick Springfield and Toto.


Side one opens with “What Do All the People Know”. This first single, while not a major chartbuster (it got to number 59 on the US Billboard Hot 200), was very popular in southern California and on college stations. It earned the band appearances on a number of 80’s compilations including Rhino’s Just Can’t Get Enough: New Wave Hits of the 80’s series (on volume 4) and EMI’s Living in Oblivion series (on volume 3). This song, about a man coming to terms with romantic feelings he has developed, has a beautiful melody with solid vocal harmonies from the guys and a clap-along rhythm.

“Somewhere in the Night” has an urgent guitar and keyboard riff with a slight Peter Gunn vibe to it. The lyrics tell of a guy who is disillusioned with the phoniness and manipulation of the social scene; he is hoping to find someone somewhere that is real and honest.

Side two starts with “Hungry Stranger”, a tune about hooking up with someone, anyone, for a night of wild passion without any strings attached.

“Blind Faith” slows things down a hint with a song about being patient as you wait for the right person to come along.

The album closes out with “Pay Pay Pay”, a song about a dysfunctional dating relationship that dances along the line of love-hate. I like the up-beat rhythms of this one quite a bit.

With all the musical potential that the Monroes showed with this debut EP, things did not work out so well for them. Their original record label from Japan dropped the US market, leaving them without any promotion and support. They were then signed by Columbia records but new musical projects kept getting shelved. Members left the band, and those remaining tried to keep it together before finally breaking up in 1988.

It is a real shame that the band was not able to record a full length album. If the five tracks on this EP are any indication, the Monroes had a lot of musical potential that could have gone far in the right studio hands. The songs are well-crafted and solidly executed. They definitely deserved more than just being an early 80’s one-hit-wonder.
Posted by Martin Maenza at 4:30 AM