Hall & Oates - Bigger Than Both of Us 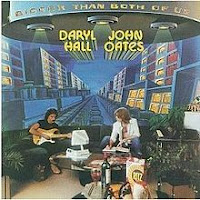 Welcome to another edition of Seventies Saturday. It is a special one as we wish a happy sixty-third birthday today (April 7th) to American guitarist, musician, songwriter and producer John Oates.

In August of 1976, Daryl Hall and John Oates released their fifth studio album Bigger Than Both of Us. This Gold selling record was the highest charting of the eight albums the duo released during the 1970’s decade; it went to number 25 on the UK charts and number 13 on the US Billboard Album chart. It also generated a trio of singles including their first number 1 hit.


Side one begins with “Back Together Again”; it is an Oates penned track and also one of three on the album on which he performed the lead vocals. This third single from the album went to number 17 in Canada and number 28 on the US Billboard Hot 100. Given that this was 1976, the song has a bit of a disco/dance sound to it; the saxophone adds to its Philadelphia soul sound too.

“Rich Girl”, the second single, reached number 5 in Canada and number 1 on the US Billboard Hot 100(it knocked out Barbra Streisand’s “Love Theme from ‘A Star Is Born’ (Evergreen) and held the top spot for two weeks until bumped aside by ABBA’s “Dancing Queen). Lyrically, this one tells of a spoiled girl whose parents’ wealth allows her to get whatever she wants. I have always enjoyed this song; it is one I sing along to whenever I hear it on the radio. What I always find surprising is that it got so much airplay even though the lyrics clearly have the word “bitch” a number of times in them.

“Crazy Eyes” was another Oates written and sung track. It starts out acoustically but moves into a sauntering soul swing with keyboards and percussion. It is all about being so in love that you don’t see straight.

As the debut single from the album, “Do What You Want, Be What You Are” went to number 52 in Canada, number 39 on the US Billboard Hot 100, and number 29 on the US Billboard R&B charts. This ballad allows Hall to serenade a special lady in a smooth and seductive manner. I like the echoing effect on the chorus.

“Kerry” slides back into a mid-tempo. The lyrics play with the homonym of Kerry (a name) and carry. While it is a cute wordplay, it gets a little tiring after almost four minutes. Definitely a filler track.

Side two opens with “London Luck & Love”, a rock flavored song with a bit of sixties psychedelic touch.

“Room to Breathe” moves back into a straight-forward, guitar-driven rock sound. Oates’ riffs on this one are really the highlight. I like how the saxophone plays off them.

“You’ll Never Learn” is the last track on the album with Oates on lead vocals. His lower key combined with the muted guitar groove and the percussion give it a very relaxed feel.

The album closes with “Falling”, a gentler ballad with a simple piano and guitar accompaniment. It gets a little cosmic towards the end though which does not seem to fit them at all.

I definitely got more into the duo from their 80’s offering, so some of these earlier albums are hit and miss for me. Hall and Oates were definitely experimenting with a number of different sounds on Bigger Than Both Of Us. Some of them worked better than others.
Posted by Martin Maenza at 4:30 AM

Email ThisBlogThis!Share to TwitterShare to FacebookShare to Pinterest
Labels: 70's, Bigger Than Both of Us, Daryl Hall, Hall and Oates, John Oates, Rich Girl

One of my ten earliest album purchases.

Love the first two tracks more than just about anything else in the H&O catalog.

Thanks for reminding me just how old I am. My only solace is knowing I am younger than you;)