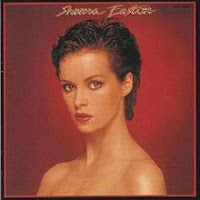 She started out her public career being filmed for a year on a BBC show called “The Big Time”. Cameras followed her quest for stardom. As the documentary was airing in 1980, her first singles rocketed up the UK charts. This would soon lead to International fame as well.


On January 18th, 1981, the then twenty-one year old Easton released her debut album Take My Time in the UK. When it was released shortly thereafter in the US, it was re-titled as Sheena Easton. The record did very well across the globe, charting in Australia (at number 57), Norway (at number 33), Sweden (at number 22), the US (number 24 on the Billboard Album chart), the UK (number 17), Canada (number 12) and Japan (number 4). It also generated a number of hit singles,

The track listings between the UK and the US releases differ slightly, in order and in content (the UK release had twelve tracks total). For this review, I will focus on the US track order.

Side one opens with the huge hit “Morning Train (9 to 5)”, the second single released in the UK in 1980. In the US it was released in early 1981 with a slight title change to avoid confusion with Dolly Parton’s then hit “9 to 5” from the film of the same name. The song spent two weeks atop the US Billboard charts (bumping out Hall and Oates’ “Kiss On My List” and then being dethroned by Kim Carnes and “Bette Davis Eyes”). The single also went to number 1 in Australia and Canada; it reached number 2 in Ireland and number 3 in the UK. The lyrics tell of a devoted girl friend that waits for her man every day when he goes off to the city to work. I have always liked this song (I had it on a 45 back in 1981) thanks to its bouncy rhythm. It is one of those songs that just put me in a good mood by listening to it.

“Don’t Send Flowers” is a mid-tempo, guitar and drum supported pop tune. The woman pleads for her guy to find some time to spend with her; she would rather have his presence rather than his presents.

The tempo slows down a tad with “Cry”, with its elements of country-pop that reminds me of Linda Ronstadt’s 70’s catalog.

“Take My Time”, the fourth and final single, only hit number 44 in the UK, number 50 in New Zealand and number 64 in Germany. This song about not rushing into a serious relationship has a light synth-pop sound to it.

To close out the side we get “Prisoner”, a mid-tempo track with a bit of an edge to it thanks to a pounding drum beat and thumping electric guitars.

Side two begins with “Modern Girl”, her first single that was released in the UK in 1980. The first time it only charted to number 56 but upon re-release six months later it went to number 8 on the UK charts. It was released in the US in the spring of 1981 and went to number 18 on the Billboard Top 40 and number 13 on the Adult Contemporary charts. The song tells of a young woman who is not defined by her relationship with her man; she works hard and makes her own living on her own terms. The way Easton sings it you would think this was certainly how she saw herself - as a liberated lady of the 80’s. I had this one too on a 45; it also got a lot of plays on my turntable during my high school years.

“So Much In Love” is a mid-tempo ballad with a light R&B groove to it.

“Voice On the Radio” brings back memories of listening to the tuner on my stereo as a teenager, tuning the dial to find stations to listen to. The lyrics tell of a young woman infatuated with a deejay who she only knows by the sound of his voice.

As the third single, “One Man Woman” only made a chart appearance in the UK (at number 14) and Ireland (number 5). The single was not released in the US. The lyrics tell of a young woman tempted by another man, but she stands by her convictions and her committed relationship.

The gentle ballad “Calm Before the Storm” closes out the record. I like how the simple piano accompaniment is used as it spotlights Easton’s wonderful vocals.

In early 1981, I was on the back side of my sophomore year of high school. As a fifteen year old, I had a bit of a crush on Sheena Easton; the photo sleeves on the 45s really showed off her stunning looks. I definitely was a fan of her singing as well and still am today. There are certainly some gems on Sheena Easton that any fan of 80’s pop music would enjoy.
Posted by Martin Maenza at 4:26 AM