Karla DeVito - Is This a Cool World or What? 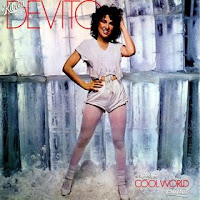 Born and raised in Mokena, Illinois, Karla DeVito got her start in acting and singing while in high school. She then attended Loyola University in Chicago where she majored in theatre. One of her earliest professional gigs was as a backup singer for Meat Loaf's tour for his Bat Out of Hell album in 1978.

In 1981, DeVito released her debut solo album Is This a Cool World or What?.


"Cool World" opens side one. The rollicking music mixes rock with a bit of an Eastern exotic flare. I love the echoing effects on the vocals added in for effect. The song was released as the first single from the album.

The up-beat energy continues with "I Can't Stand to Reminisce" and its strong piano accompaniment. DeVito has a growl and grit to her vocals at times which helps with her touch-chick persona, yet she also can hold some incredible notes.

"Heaven Can Wait" is the first of three covers on the album. This one is the Jim Steinman penned tune from Meat Loaf's debut album; her angelic vocals differ a good bit from the booming power of the original. For the most part, this one works for me.

The next track is also a cover. The Grass Roots recorded the most famous version of "Midnight Confession" in 1968, though they too were doing a cover as the Evergreen Blues Band did a demo of the song first. Bring it in from a female viewpoint, DeVito adds an intriguing spin to this classic song about unspoken, forbidden love with a married man. I like the angelic chorus and organ that adds that whole church confessional aspect to it. This was the second and final single released from the album.

DeVito brings out the seductive side in "Big Idea", a track with a 60’s girl-group throwback sound.

The final cover is John Fogerty's "Almost Saturday Night" from his 1975 self-titled solo album. I am not very familiar with the original so it hard to compare the two. This one is sort of an average track for me compared to the rest of side one.

"Boy Talk" begins side two, a rousing rocker about a woman offering a shoulder to a guy she just met and encouraging him to reveal what is bothering him. Her backing band gets a chance to jam on this one a bit.

"Just One Smile" is a straight-up ballad that allows DeVito to show her vocal range. Like Pat Benatar, she really has quite the musical chops.

The tempo speeds up again with "I'm Just Using You". I like how easily DeVito goes from a lower register on the verses to a higher register on the chorus. Lyrically, it is all about female empowerment, with DeVito acting like a guy who uses someone for her own satisfaction.

"Work", a reflection on the drudgery of some employment, has a march-beat with an industrial pounding to it. That gives it a bit of a new-wave rock sound. DeVito infuses it with a lot of attitude, and the lyrics reference the time that she worked in a local factory on a production line.

"Bloody Bess", the B-side of the first single, is a pedal-to-the-metal ode to 17th century pirate queen. The song is in reference to a theater show that was running in Chicago. I love the sounds of the creaking sails and wind at the opening; they set a perfect mood for this epic tune.

"Just Like You" closes out the album on a gentler note. This ballad has a music box melody and allows DeVito to use her theatrical background in an emotional way. I like how her vocals and the music trail off to silence; a perfect way to close a record.

In that same year as the album debuted, Karla DeVito took over the lead role from Linda Ronstadt in The Pirates of Penzance on Broadway. Not only was she a favorite of critics and audiences alike, she got an added benefit from the show; it was during this production she met and fell in love with teen heartthrob Robby Benson. The two married a year later in 1982 and have been together for thirty years; they have two children Lyric (their daughter) and Zephyr (their son).

Karla DeVito has a rich, vibrant voice and a charismatic personality. Is This a Cool World or What? is a solid album that may not have gotten nearly as much exposure as it should have. I think, perhaps, the timing was just a bit off. The record came out before MTV had gotten into a large number of markets; her entertaining performance style would have been a perfect match for the new music video market. She did get to do a concert on MTV’s New Year’s Rockin’ Eve 1982, the first for the channel, but by then her record was already difficult to find. (You can find the videos from Karla's personal library up on YouTube...check them out!)

If you like fun pop-rock that is one part Pat Benatar and one part early Cyndi Lauper, I would strongly recommend you fire up Spotify and give a listen to this album. Then, go to iTunes or Amazon.com and download it like I did.
Posted by Martin Maenza at 4:33 AM

Email ThisBlogThis!Share to TwitterShare to FacebookShare to Pinterest
Labels: 80's, Is This a Cool World or What?, Karla DeVito, music