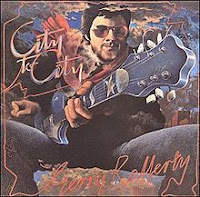 Today (April 16th) would have been the sixty-fifth birthday of Scottish singer and songwriter Gerry Rafferty. He passed away on January 4th, 2011, due to liver failure.

On January 20th, 1978, he released his second and most popular studio album City to City. The record went to number 6 on the UK charts and number 1 on the US Billboard Hot 200. It also generated a trio of Top 40 hit singles.


Side one launches with “The Ark”, a track that was released as a single in Germany and Holland only. It opens with soft Highland bagpipes and Rafferty joins in on acoustic guitar. The lyrics are one of new beginnings, of a journey to something different and hopefully better.

“Baker Street” was the first single, released in February of 1978. The song was very successful, peaking at number 3 on the UK charts, number 2 on the US Billboard Hot 100 (denied number 1 by Andy Gibb’s seven week lock on the top spot with “Shadow Dancing”) and number 1 in Canada. The lyrics were inspired by Rafferty’s many trips to London to stay with a friend who lived in a flat off of Baker Street. The signature saxophone riff was played by Raphael Ravenscroft. Whenever I hear this one, it takes me back to my early teen years; I can remember it playing all over the radio in the late 70’s.

“Right Down the Line”, the second single, reached number 12 on the US Billboard Hot 100 and number 1 on the US Easy Listening chart. I like the light Latin swing to this one. One thing that sticks in my head: whenever Rafferty sings the word “woman” at the end of the chorus, I start to hear Quark in his Ferengi accent saying the word. Yes, the geek just made a Star Trek: Deep Space Nine reference.

The title track is next. “City to City” was released as a single in Belgium and Holland only. The song has a train-rolling rhythm that sets that rambling mood perfectly. Paul Jones is featured on the harmonica on this one.

“Stealin’ Time” has a laid back country sound to it with the steel guitar and the electric piano. The laid back lyrics bring to mind images of a sunny day and lying in grass while watching the clouds waft gently by high above.

Side two opens with “Mattie’s Rag”, a piano and accordion supported syncopated rhythm that would make Scott Joplin proud. The brass arrangements are a nice touch too.

“Whatever’s Written in Your Heart” has a number of spiritual aspects, from the simple piano accompaniment to the harmonious backing vocals. This is such a pure, honest song from the heart.

“Home and Dry” was the third single released in the US market, where it went to number 28 on the Billboard Hot 100. I like the thumping drum beats and the sweeping synthesizer sections; they go perfectly with the string arrangements. The lyrics talk of traveling with the anticipation of returning home to the one you love.

Ravenscroft returns with a sweet saxophone opening on “Island”. It has a sleepy sunrise quality to it, liking waking up in a warm tropical environment with all the cares of the world thousands of miles away.

The album closes with “Waiting for the Day”, a song about hope for a better tomorrow.

What I like about the tracks on City to City is that Rafferty is more than willing to let the songs breathe and play out as need be. The shortest track is three and a half minutes, the longest over six and a half. This is a full and rich album of music. You clearly get your money’s worth here.

Gerry Rafferty had a talent for crafting beautiful songs that captured the heart and emotion of the moment. His voice was welcomed like cool breeze on a hot summer day, cool
Posted by Martin Maenza at 4:30 AM

One of my favorite albums!