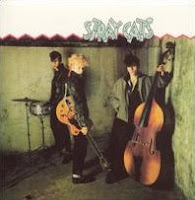 Hailing from Massapequa, NY, Setzer formed a band in 1979 along with Lee Rocker (playing the upright bass) and Slim Jim Phantom (on drums). As the Stray Cats, the trio played in a rockabilly style based upon artists from the 1950’s including Carl Perkins and Bill Haley & His Comets. While performing their act around the New York City area, they attracted attention of both studios and other recording artists. Dave Edmunds worked with the group and got them signed to Arista Records.


With Edmunds as a producer, they released their self-titled debut Stray Cats in February of 1981. The record was released only in the UK where it peaked at number 6 on the charts. The songs proved popular and soon began playing on American college radio and then mainstream radio too.

Side one opens with “Runaway Boys”, the first single from the album. It went to number 9 on the UK charts in 1980. The lyrics lament about the troubles of being a restless teenager whose parents do not understand him. Thrown out of his home, he has to live on the street and avoid getting in trouble with the law.

“Fishnet Stockings” is a doo-wop celebration of heat-inducing hosiery. And who can blame Setzer here? How many guys have had their head turned by a well-adorned set of legs? Plenty.

Slim Jim brings out a tribal beat for “Ubangi Stomp”, a song about an excursion to the jungles of Africa. It is as if someone took a National Geographic special and gave it a rocking beat.

“Jeanie, Jeanie, Jeanie” was originally recorded by Eddie Cochran in 1958. As Cochran was one of the artists who inspired the Stray Cats, they felt justified in covering the tune here.

“Storm the Embassy” is the first and only time the band recorded a political song. The lyrics make commentary on the Iran hostage crisis that occurred in 1979 and 1980. I like how Setzer does a few bars of “America the Beautiful” on his guitar midway through the song.

“Rock This Town”, the second single, went to number 9 on the UK charts in 1981 and then number 9 on the US Billboard Top 40 in 1982. Edmunds and Setzer co-penned it. This was one of those songs that were a big hit at our school dances in 82 and 83; everyone would just cut loose and have a ball with it. I love the guitar opening riff with the drums and bass quickly folding in.

Side two starts with “Rumble in Brighton”, a song very reflective of the troubled times in England in the late 70’s and early 80’s. The police were helpless to stop the violence and most everyone else just watched the spectacle.

The third and final single from the album “Stray Cat Strut” hit number 11 on the UK charts in 1981, and then number 3 on the US Billboard Top 40 in 1983. I have always liked the slinky musical arrangement on this one; it perfectly emulated the feline mystique.

On “Crawl Up and Die”, the singer has come down with a mysterious malady that has him feeling like he could up and die. I like this one’s down and dirty groove.

“Double Talkin’ Baby” kicks things back into gear with the high-energy dance beat of a song about a girl who is a bit of a tease. She cannot decide what she wants and it is driving her man crazy.

“My One Desire” was a track penned and recorded by Dorsey Burnette, a Tennessee rockabilly singer from the 60s and 70‘s. The band does a fine job on this cover as well, capturing that classic sound.

The album closes with “Wild Saxophone”, a bouncing boogie that features Gary Barnacle on the sax.

Six of the songs from this debut album and five from their sophomore effort were combined with a new track to create the 1983 compilation Built for Speed. That album was the Stray Cats’ first release in their native America.

I first got into the Stray Cats in 1982, thanks to a combination of hearing their songs on the local college radio station and via videos on MTV. Because their debut albums both were only released in the UK, I was confused and thought them to be a UK band originally. Of course, when Built for Speed hit the US record stores I was all over it; I bought my copy on vinyl at our hometown Record Giant store. I am still a big fan.
Posted by Martin Maenza at 4:30 AM

excellent blog Martin! I love Brian Setzer still and when he was the front man for the Stray Cats.

Thanks, Rosemarie, me too.