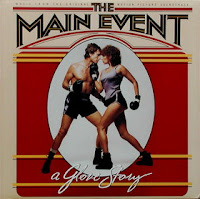 In the June of 1979, Streisand starred along with Ryan O'Neal in a film that divided the movie-going audiences. Critics hated it yet the audiences made it a box-office blockbuster by putting it in the Top 20 grossing movies of 1979. It is the story of a perfume manufacturer (Streisand) who finds out her accountant has left her penniless. One of the few assets she has left is a boxer (O'Neal) who she devotes all of her time, attention and business savvy to turn into a success. Along the way, feelings develop and complicate matters. The film was, of course, The Main Event.


Streisand naturally contributed to the soundtrack album. The record was a big seller as well, reaching number 20 on the US Billboard Album chart and number 11 on the Canadian album charts. The sales were completely driven by the hit title song which appears in three different flavors on this release.

Side one opens with "The Main Event/Fight" by Streisand. This first track is an eleven-and-a-half-minute cut, with an extended symphonic opening, extra verses and an extended disco groove. I am sure this one was quickly adopted for aerobics classes back in the day; the film in fact opens with Streisand’s character at one such type of class. There is no denying that this one has a beat that begs you to get off your butt and move.

Next up is "The Body Shop" by Michalski and Ooversteen. The track has a down-and-dirty sound thanks to funky guitars and a heavy percussion sound, the perfect follow up to track one.

Side two starts with Streisand's return with "The Main Event/Fight (short version)". This radio-ready edit (just shy of five minutes) of the opening opus as a single went to number 3 on the US Billboard Top 40 and spent thirteen weeks total on the charts. I have always liked this song and even after thirty two years do not grow tired of it; it is a four star rated track in my iTunes library.

Michael Melvoin, American jazz pianist and composer and also father of Wendy and Susannah Melvoin (both who had affiliations with Prince in the 80's), worked with Streisand previously on A Star Is Born. He provides a trio of tracks for this album; the first is "Copeland Meets the Coasters (Get A Job)". This instrumental interlude clocks in just under a minute and overlays a classical overture with the rock classic “Get A Job“ from the Coasters. It is different.

Frankie Valli and the Four Seasons are next with the classic "Big Girls Don't Cry". The song was a number 1 hit single in the US in the Fall of 1962. I’ve always liked the plunk-plunk rhythm of this one and the counterbalance of Valli’s falsetto with the deeper tenor of the rest of the Four Seasons.

Melvoin is back with "It's Your Foot Again", another instrumental piece. This one is straight-forward though with no odd surprises. It works well as sort of a love theme for the film.

"Angry Eyes" by Loggins and Messina first appeared on the duo's self-titled 1972 album. While that album version was nearly seven minutes long, they released a single version in 1973 that peaked at number 1 on the album-oriented rock charts; it is that later version that appears on this soundtrack. The song has a rocking sound that brings a whole different genre to this musical hodge-podge.

Melvoin adds one more track "I'd Clean A Fish For You", another slightly longer than a minute instrumental. This one has a mood of apology and begs for forgiveness.

The album closes with Streisand again with "The Main Event (ballad)". This version strips away all of the disco beats and leaves a slower piece with full orchestration behind it. The piano accompaniment is very prominent and the vocals are classic Barbra, beautiful and powerful at the same time.

I was fourteen years old when The Main Event hit the big screen in the small western NY town where I grew up. My cousin Joan and I went to see it on August 18th of 1979, and I remember it being a pleasant way to spend a summer afternoon. Streisand had proven herself adept at romantic-comedy roles. When the title single was climbing up the radio charts, I dropped into our local Record Giant store and plopped down 99 cents for the 45.

I had forgotten about this piece of my youth until a few years ago. We were in one of those local bargain stores, where everything you never wanted is for sale and a rock-bottom price. I started digging in the cheap DVD bin and ran across a copy of the film. For old time’s sake, I spent the two or three dollars to buy a copy. Sure, it is a bit dated and silly, but sometimes that is exactly what you need after a really stressful day.
Posted by Martin Maenza at 7:13 AM