The Motels - All Four One 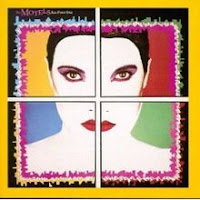 Today (April 5th) marks the 30th anniversary of the release of the third studio album from the Motels, the California based new-wave band of the 80’s fronted by lead singer and guitarist Martha Davis.

All Four One was the highest charting release from the group, reaching number 16 on the US Billboard Hot 200 and being certified Gold in sales. Most of the songs were re-recordings of tracks from an unreleased third album entitled Apocalypso; lead guitarist Tim McGovern left the band at the end of 1981. On this album, Guy Perry stepped into that position in the group.


“Mission of Mercy” kicks off side one. This first single reached number 23 on the US Billboard Mainstream Rock charts. I pick up a little bit of a Peter Gunn theme to its rocking rhythm. It is a solid opening track.

The third single “Take the L” went to number 52 on the US Billboard Hot 100 and number 36 on the US Mainstream Rock charts. I like ominous drum thuds in the background from Brian Glascock and the lyrical word-play of the chorus (“take the L out of lover and its over”).

“Only the Lonely”, the second single, is probably the most known track from the album. It reached number 21 in Canada, number 10 in New Zealand, number 9 on the US Billboard Hot 100, number 7 on the US Billboard Dance charts, and number 6 on the US Mainstream Rock charts. I like how the song builds, with the keyboards framing the first verse and then the drums coming in next. Marty Jourard provides the sad-sounding saxophone solo. This track was one of those great teenage heartbreak tunes during my high school years; the music and lyrics make for great melodrama.

The final single “Art Fails” barely made a blip on the radar which is kind of surprising. It has a number of interesting musical elements - a vibrating base line from Michael Goodroe, plinking synths from Jourard and striking vocals from Davis.

The Motels go for a genre switch-up on “Change My Mind”; this one has a smooth jazz sound to it which I like a lot.

Side two begins with “So L.A.”. It has a very new-wave sound that reminds me a bit of Missing Persons, another California band on the charts at the time. The lyrics take a stab at the whole Hollywood image.

As one would expect, “Tragic Surf” pulls in rhythmic elements of classic 60’s surf rock. The song tells the heartbreaking tale of a love torn apart by the waves.

The tribal beats and flittering synth tweets give “Apocalypso” an appropriately exotic sound.

The next track “He Hit Me (And It Felt Like a Kiss” is a cover of a song written in 1962 by Gerry Goffin and Carole King, recorded by the Crystals. The lyrics referenced Little Eva being regularly beaten by her boyfriend, an act the singer tolerated as she felt he did so out of love for her. Davis’ vocals convey the right emotion to deliver this problematical tale.

“Forever Mine”, the fourth single, went to number 60 on the US Billboard Hot 100. It ends the album on a bouncy note; I find the musical riffs on this one to be very catchy.

Back in 1982, I did not pick up All Four One even though I was a big fan of their hit “Only the Lonely”. And that was totally a bad on my part. I definitely enjoy the sounds that the Motels were offering up on this record. There is a nice variety to it that makes going from track to track enjoyable. I’m not getting the same thing over and over which makes me want to listen to the whole album from start to finish.

All Four One is another one of those albums that I look forward to downloading and listening to a lot in the years to come.
Posted by Martin Maenza at 4:30 AM

Martin when this come out it was was in heavy rotation on my turntable. The Motels later albums sorta fizzled for me just didn't have what this one did.

Jim, glad to hear this was a favorite. It definitely was a high point in the group's career.

"Take the L" is a kick-butt tune. I only just discovered this band about a month ago (god bless youtube).

Good stuff. I'm going to listen to this album on Spotify right now.