The Partridge Family - Up To Date 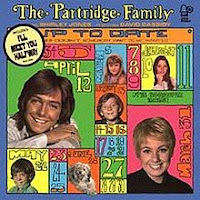 
Up To Date shipped on vinyl, cassette and 8 track formats. It went all the way to number 3 on the US Billboard Hot 200, number 2 in the UK and number 1 in Canada. Once again, songwriters Wes Farrell, Tony Romeo, Gerry Goffin, and Terry Cashman composed the tracks performed by Cassidy, Shirley Jones and the studio musicians (Hal Blaine on drums, Joe Osborne on bass, Mike Melvoin on keyboards, and Dennis Budimir and Louie Shelton on guitars).

Side one begins with "I'll Meet You Halfway" which as the second single went to number 9 on the US Billboard Top 40, number 4 on the US Adult Contemporary charts, number 9 in France, number 7 in Australia and number 4 in Canada. I like the simple piano opening with the light strings in the background and how the song builds from the verse to the chorus.

"You Are Always on My Mind" is a pleasant pop song about being so in love that you can’t get that person out of you head (nor would you want to). This one is just one of the many great examples of the backing vocal harmonies that made up the “Partridge” sound; they went perfectly with the rich texture Cassidy’s voice. This was the B-side of the first single.

"Doesn't Somebody Want to Be Wanted", released as a the first single, went to number 6 on the Billboard Top 40, number 6 in France, number 9 in Australia and number 1 in Canada. When I hear this song, I can instantly recall the episode it appeared in. It was the one where Danny’s birth certificate was misplaced and he got it into his head that he was adopted. The song played as he was going from door to door to try to find what he believed was his birth mother. (Wow, it is amazing what kind of trivia gets stuck in your head after four decades.)

"I'm Here, You're Here" has a bit of a cool bohemian sound at the start with the piano and the bongos. The lyrics have a bit of a stalker vibe to them as an obsessed guy finds himself alone with the gal of his desires. Of course, none of us thought of that when we were watching this family show back in the 70’s.

"Umbrella Man" is an upbeat number about a guy who wants to turn a pretty gal’s frown upside down with his love.

The final track on this side is also the first track David Cassidy contributed for the show; along with Farrell, he wrote "Lay It on the Line". The song has a stronger guitar sound to it which was more in line with the type of music Cassidy preferred to perform.

Side two starts with "Morning Rider on the Road", a gentler ballad that has a sound that brings to mind natural places away from civilization. This was the B-side to the second single.

"That'll Be the Day" is one of those songs from the show that you don’t instantly remember by the title, but when you hear it you know it. There were a lot of songs from the show like that. I like how the lyrics of this one flow at an interesting rhythm.

"There's No Doubt in My Mind" is up next. While a good pop song, it is not one of those that I have a strong recollection of.

Another gentle ballad is next with "She'd Rather Have the Rain". The lyrics tell of a girl who has rejected the love of a young man. I can’t imagine any girl back in 1971 that would reject someone like Cassidy, but I am sure there were some.

The album closes with "I'll Leave Myself a Little Time", a song about self-reflection.

As I’ve mentioned before, I grew up on watching the Partridge Family on the first run episodes on ABC and then for years after in syndication (a local station out of Buffalo ran them often after school on weekdays). While I did not have this album myself back then, my cousin Joan who was two years older than I did. I can recall listening to it on her record player when I would go over to hang out, which I did often as we were close like siblings.

In recent years, I picked up this album on re-mastered CD. I’ll listen to it when I am in one of those moods for light-hearted pop; it always takes me back to my carefree days of childhood.
Posted by Martin Maenza at 4:30 AM