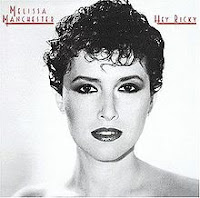 This month marks the 30th anniversary of the April 1982 release Hey Ricky, the tenth studio album from singer/songwriter Melissa Manchester. The record went to number 19 on the US Billboard Hot 200 and generated a trio of singles including one Top 10 hit.


Side one begins with the second single from the album. "You Should Hear How She Talks About You" was a smash hit, reaching number 5 on the US Billboard Top 40, number 10 on the US Billboard Adult Contemporary, number 4 in Australia, number 5 in Canada, and number 20 in New Zealand. Written by Dean Pitchford and Thomas R. Snow, the song was first recorded by English singer Charlie Dore for her 1981 album Listen!. Arif Mardin produced Manchester's version and gave it a new wave dance flavor that worked out well. It won the 1982 Grammy Award for Best Female Pop Vocal Performance, beating out performances by Laura Branigan, Juice Newton, Olivia Newton-John and Linda Ronstadt. I had this song on a 45 back in the day and played it a lot. I love the upbeat rhythm from the Mardin on the synthesizers and the sweet saxophone solo by Larry Williams. The lyrics are like eavesdropping on a conversation between two BFFs.

From high energy we go to low-key with "Slowly". This ballad is the type of song Manchester typically charted with, one that spotlights her strong vocals. It is all about taking your time with an old fashioned romance.

The title track "Hey Ricky (You're A Low Down Heel)" was the third single. Manchester co-wrote the song with Bernie Taupin, long-time collaborator with Elton John. The tune takes aim at a player of a ladies man, tearing down the walking cliché. I like the attitude that she delivers on this lively ditty.

"I'll Always Love You" was originally recorded by Anne Murray for her 1979 album of the same name. I like the simple accompaniment on this one.

"Race To The End" was the first single. The song takes the instrumental theme from the 1981 film Chariots of Fire by Vangelis and adds lyrics by Jon Anderson. While Manchester’s vocals mirror the pageantry I always think of when I hear this anthem, for me the words are really unnecessary.

Side two starts with "Wish We Were Heroes", a duet with David Gates of Bread. Their voices blend well and create a pleasing harmony. Gates also plays the guitar here, and Don Brooks is on the harmonica.

"Come In From the Rain" was released as the B-side to the third single. The song, co-written with Carole Bayer-Sager, originally appeared on Manchester’s 1976 album Better Days and Happy Endings. This new version features a richer string arrangement.

"Looking For the Perfect Ahh" was also a Manchester/Bayer-Sager collaboration along with Robbie Buchanan. The tempo gets us back to the more modern sounds of the singles from the first side with a bit of a sci-fi video game effect on the “ahh” in the chorus. It catches you off-guard the first time you hear it.

"Your Place Or Mine", with its funky R&B riff, was featured on the soundtrack of the April 1982 comedy A Little Sex starring Tim Matheson and Kate Capshaw; the film was directed and produced by Bruce Paltrow.

"Someone to Watch Over Me" is a cover of the 1926 Jazz standard by George and Ira Gershwin. I like that it is very stripped down, with just Manchester singing and playing the piano.

A later Japanese re-issue of the album included the track "Long Goodbyes", which was the B-side of both the first and second single. Again, this was another earlier track, this one from the 1977 album Singin’, that Manchester re-recorded for the new album.

Hey Ricky was right in that Top 40 pop genre that I was still very much into in my early high school days. I was already familiar with the singles, especially the big hit track. The rest of the album is a relaxing listen delivered by a strong vocalist.
Posted by Martin Maenza at 4:30 AM

Great Singer. Great Songwriter. She deserves much more recognition. One of my faves - "Lights of Dawn." Simply gorgeous song.

Michael, I agree with you totally.