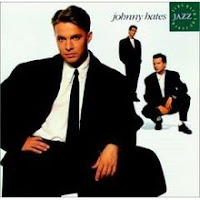 In 1986 Hayes along with Clark Datchler (singer/keyboardist/guitarist) and Mike Nocito (guitarist/bassist) formed the Anglo-American pop/rock band Johnny Hates Jazz (Hayes and Datchler had previously been in a band Hot Club together). The new group’s first single was “Me and My Foolish Heart”, released in 1986.

Later that year they were signed with Virgin Records and in early 1988 they released their debut album Turn Back the Clock. The album entered the UK charts at the number 1 spot, quickly achieving double platinum sales status. In the US, the album reached number 56 on the Billboard Hot 200 album charts.


Side one starts with “Shattered Dreams”, the first single from the actual album. It was a big seller, reaching number 5 on the UK charts, number 2 on the US Billboard Hot 100 (spending three weeks at that spot denied the top spot by George Michael’s “One More Try”), and number 1 on the Billboard Adult Contemporary charts. This song has a great beat and a number of wonderful musical hooks; the vocals are smooth with a touch of sadness as they tell of a breakup.

As a single, “Heart of Gold” reached number 19 in the UK. The lyrics tell the story of a hooker with a heart of gold. I am a big fan of the rich horns provided by Martin Drover, Malcolm, Molly Duncan and Neil Sidewell; they compliment the swing beat nicely.

The title track “Turn Back the Clock” as a single went to number 12 in the UK and number 5 on the US Adult Contemporary charts. The opening keyboards set the tone nicely for this ballad. Kim Wilde provides some backing vocals on this track. It is definitely one of those gems of the late 80’s that has been forgotten over time.

“Don’t Say It’s Love”, the final single, topped out at number 48 on the UK charts. The lyrics of this mid-tempo track warn of interpreting a great friendship as something more.

“What Other Reason” is a gentle ballad with a prominent piano presence. It supports Datchler’s heart-felt vocals.

Side two opens with “I Don’t Want to be a Hero”, the second single which went to number 11 in the UK and number 31 in the US. The song is an anti-war anthem, written from the viewpoint of a reluctant soldier who wrestles with his involvement in what he perceives as an unjust war. The serious theme of the song is countered with very danceable beats and funky guitar riffs.

“Listen” is next. This one is all about taking the time to really listen to what your heart is saying to you and to make a decision based on what you feel, not about what family or friends might think.

“Different Seasons” is another melancholy song that acts as a great continuation from the album’s first track. I like how the “on and on and on” trails off every time, like the pages of a calendar flipping by to show the painful passing of time.

“Don’t Let It End This Way” has a bouncy, reggae-like tempo to it. If I close my eyes, I’m taken off to an isolated beach somewhere - a place for solace and reflection.

“Foolish Heart”, a re-titled version of that original 1986 single, closes out the album. This track has more of a synth sound to it which matches more the musical styles of the earlier part of the decade.

Turn Back the Clock is another of those late 80’s albums that I had purchased on cassette as I was starting my post-college adulthood. As I had been growing up and maturing so was my musical tastes. And this album by Johnny Hates Jazz is a mirror reflection of that; sophisticated adult oriented pop music. It was the right album at the right time for me. Listening to this one again, twenty-three years later, I still find it to be a very solid collection of songs. It is definitely time to get this one back into my digital music rotation.
Posted by Martin Maenza at 4:30 AM

I'm ashamed to admit that I only know "Shattered Dreams". That's a classic - I'll have to check the rest of the album out someday!

I absolutely LOVE this review. I am definitely posting this on my radio station's facebook fanpage! There is sometime to be said for reviewing an album almost 23 years after its release. There is an ability to reflect and re-evaluate - which is not easy to do with a newly released album. Once again, great review!